The Conservative Art Critic: Tilted Arc as appreciated by a Reaganite

Firstly, Richard Serra is not a Republican. Obvious from one of his appearances at the 2006 Whitney Biennial: 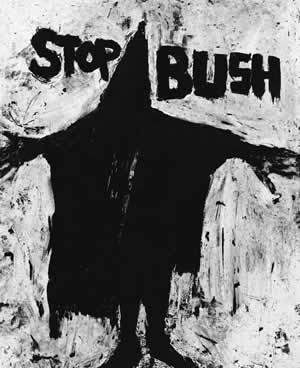 Yeah, real nice job there Richie. Reminds me of one of my own pieces chastising Michael Moore- direct, obvious, and terribly forgettable.. There was also his altered version of Goya’s Saturn Eating His Children, with…you guessed it, Bush, used in the 2004 Presidential campaign at the pleasevote.com website. Yes, it was direct political work used for the campaign against Bush, but I expect a little more from Serra, and you’ll pick up why as you read on.

Serra thankfully contributed recently to the Broad Contemporary at the Los Angeles County Museum of Art, with Sequence and Band, two monumental works more reminiscent of his monumental (yet minimalist) site-specific masses of steel prevelant in his earlier career. Transversing both has a psychological impact on the viewer. Their mass both looms and recedes over you, ungulating in alternately comfortable and frightening regularity. Stick with what you do like no other, Richard. Which brings us to my favorite work of Serra, one which should surprise my fellow conservatives: 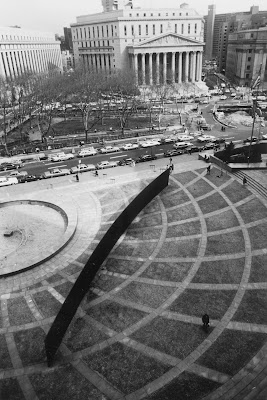 It’s very simple. A 120 foot by 12 foot band of COR-TEN steel, slightly tilted and bowed, running diagonally across the plaza, forcing many workers in the plaza to walk its entire length to cross. “The viewer becomes aware of himself and of his movement through the plaza. As he moves, the sculpture changes. Contraction and expansion of the sculpture result from the viewer’s movement. Step by step the perception not only of the sculpture but of the entire environment changes,” so said Serra, confirming the forced encounter to be the very point.

Criticism of the work erupted immediately, most notably from the government workers at the plaza. They complained, incessantly, that it made public use of the plaza impossible. Of course critics had to come up with something worse sounding than that, so accusations of the work as a magnet for the homeless, rats, graffiti, or even terrorists (!) were hurled out there as well. Serra tried to defend the work as site specific, and has been adamant that public art liks Arc is fundamentally undemocratic, so protests from the public against it were moot. That fell on deaf ears, and a public hearing on the matter, despite supportive testimony outnumbering complaints, went 4-1 against Serra. They had ruled it to be removed and placed elsewhere, but as anyone who has experienced a Serra work of this scale up close, you can agree with Richards assertion that it is site specific. Moving it will simply rob it of its purpose and destroy it. So, how does a conservative see this gargantuan obstruction? 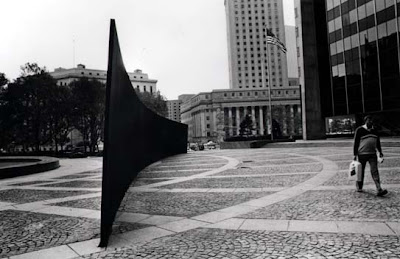 Fondly, in fact. Unlike most critics who often interpret works in directions diametrically opposed to the intent of the artist, without admitting to it, I will. This is NOT, I am sure, the works purpose in its creators eyes. But it is in mine. The placement of the work is critical. Federal Plaza workers, mostly of the government variety, screamed bloody murder that it made walking across to get a hot dog or drop off forms longer. Not impossible, just irritatingly longer. Humph. Something massive, out-of-place, and obstructionist. Government itself comes to mind here. Unlike in statist nations, where government really is everywhere you can think of (and would be in your own thoughts if it had its way) “government” here does not stop you from going where you need to go or doing what you need to do, it simply taxes, regulates, and investigates it to the point that you may not want to. It looms over, looms away, much like the ungulating form, but its always there, its presence unavoidable. 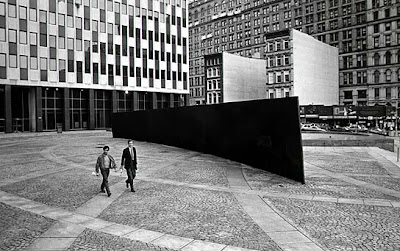 The irony in the whole controversy was that government workers themselves were protesting the loudest, complaining that it ‘made their daily work difficult’, something I suspect many of the same workers would scoff at if a member of the public lodged the same complaint about them. Tilted Arc stood as a reminder of the aggrevation a government presence can cause. People will get themselves out of your way in an open space. Cold steel stays put. Serra was dead right about its site-specific nature. It was an unintentional representation of the nature of government- obtrusive and vast. He defended the work by arguing that art isn’t democratic. Fundamentally, government bueracracy isn’t either- it is about controlling what the citizen can and cannot do, where he can and cannot go. That same government ultimately led to Tilted Arc‘s destruction. The only time government seems to work is against itself when part A gets in the way of part B’s footlong and Diet Coke.

The timing of the work, 1981, coincided unintentionally with the rise of Reagan and the GreatLeapRight. Government, as it grew and aged through the 1950s, 60s, and 70s, became seen by an emerging American majority not as a useful part of our lives, but an eyesore, an ugly mass that just seemed to get in our way.

Its a shame that with our current government spending spree, and the Presidents proposals to expand government powers, we don’t have just such a cold, oxidizing mass running the length of the Mall…bending from Capitol Hill to 1600 Pennsylvania Avenue.

Richard, are in the market for another arc?

from my blog, The Conservative Art Critic…