Its official on the rolling adjusted poll average, McCain has flipped Colorado in the data and clings to a lead: 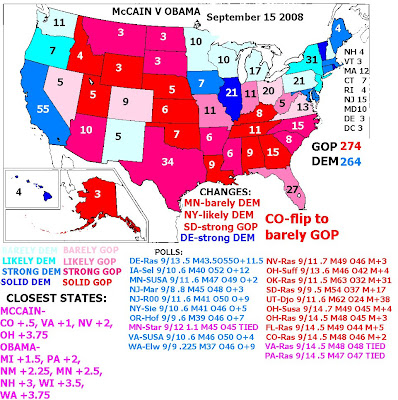 While polling from Virginia suggests a slightly more favorable environment to Obama, that is trumped by McCains INCREDIBLE advances in the last few days. First, Washington state became a tossup- a state where Obama had been burying McCain by double digit leads all year. Then two shock polls from Minnesota- the latest from the Star Tribune showing the two tied there. Obama’s 10.5pt lead has collapsed there. Now, New York is following a similar pattern. Sure, its Fool’s Gold for Republicans (like neighboring New Jersey), but Obama’s 16pt lead there has also collapsed. If Blue New York is really within single digits, McCain has made incredible ground that may not be reflected evenly in all the state polls (and may have actually already flipped much of the “barely DEM” states). Lastly, we have one credible pollster showing Pennsylvania as a total tie- Rasmussen- bringing the number of Blue states polling tied or advantage McCain to two. As I mentioned in my previous few entries, I have hesitated to call this election McCains to win or lose, but the dynamic has shifted to the Republicans. Once we begin tying states like Minnesota and Pennsylvania, and eating at Obamas leads in states like Washington and New York, the ball is now (albeit barely) in our court.