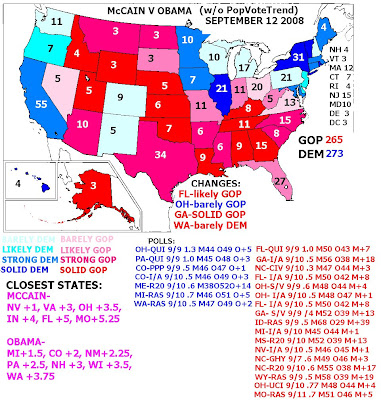 McCain still has trouble sealing the deal in New Mexico/Colorado or flipping a Kerry state.

Though Washington now goes on the list of states Obama needs to worry about- the last Rasmussen poll there gave Barack a 12-point lead. This one? 2. It now joins the roster of up for grabs states.

When you adjust the current trend to McCain and the popular vote lead hes showing (currently 3.5pts), and you factor that into the remaining undecideds (and his performance amongst the independents which has surged), that “few points” of difference creates a dramatically different map: 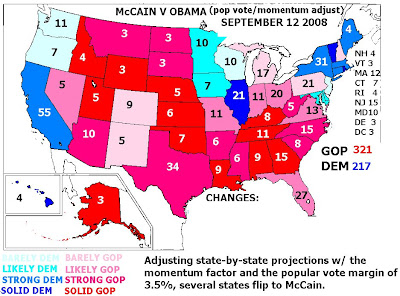 With Team Obamas current campaign schedule, methinks the internal polling shows something in between these two maps- a prospect that surely worries the Democrats who are trying to help Barack regain his footing in the race.

Polling will explode from now through election day- Mason Dixon is expected to release about 6-10 polls Sunday, Rasmussen perhaps another 10-20 next week, and who knows what else from everyone else!

Remember, the second map is pure conjecture based off McCains current national polling momentum and the numbers regarding his performance amongst the independents. Until McCain’s polling average puts him ahead in Colorado, New Mexico, Pennsylvania, Michigan, Wisconsin, or Washington, Obama is still winning this thing.