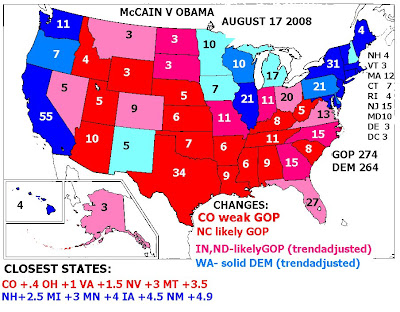 Had to adjust several states for the trend, but with a poll out of the RockyMountainNews, it is enough to change Colorado from tossup to weak GOP, giving McCain a 274-264 lead in the Electoral Vote and winning the General Election.

This is his first lead in my projections in weeks, riding on a trend that has shown him flipping swing states back to his favor (Virginia, Ohio, and now Colorado), building on leads in traditionally GOP safe states (North Dakota, North Carolina, Indiana, Texas, Mississippi, Georgia, South Carolina), and cutting Obamas edge down in the Democratic leaning swing states (Michigan, Iowa, New Hampshire, and Minnesota).
New polls this week I’m sure for Pennsylvania, Michigan, New Mexico, Ohio, Florida, and New Hampshire.

I am fully aware that I am perhaps the ONLY person on the Web projecting the election for McCain right now.Nate @ FiveThirtyEight still shows it going to Obama (though in a recent post he has commented that Ohio and Colorado are on the verge of flipping).My projection method is very, very similar to Nates, the difference being that “current momentum” plays a bigger roll in my averaging results. McCain has clearly regained his footing in the state-by-state polls (much like Obama had clearly rode quite a wave of support in June) and the current overall push for McCain in the 2004 swing states is enough to build on his raw averages in two states in which Nate and I differ.

EVERYONE uses different methods.RealClearPolitics uses a RAW averaging system (which currently shows Indiana as weak Obama despite using month-old polling, Colorado as .5 McCain, and Ohio as .5 Obama).ElectionProjection uses hunches, trends, and polling averages.The Votemaster @ E-V.com uses the absolute latest non-partisan polls (or an average if 2-3 break in one day).

So for the sake of saving bandwidth, please avoid the “but but RCP/538 IS DIFFERENT WTF?” comments.

(and FYI- Obama still wins the popular vote by 1.2 million in my current projection. Currently the 2000 scenerio all over again)

UPDATE–Thanks to PPP (D) showing Ohio as a 45-45 tie, RCP has just updated its average,tipping Ohio to McCain. 538 will probably follow suit following his methodology. Here is a snapshot comparison of myself to 4 big projection sites (RealClearPolitics, Electoral-Vote, ElectionProjection, and FiveThirtyEight): UPDATE #3- Cold Hearted Truth now shows McCain with the IDENTICAL 274-264 EV lead, also flipping Colorado and Ohio.If RCP would use that LegislativeInsight poll from Indiana and drop the 60day old SUSA polls, RCP too would be @ 274-264.

UPDATE #4- Here is the state-by-state polling shift since Obama clinched the nomination in early June: 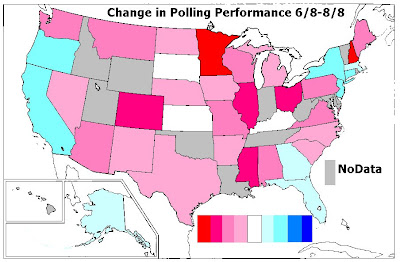