There are things we know – he founded the Internet, he saved NASA, and he’s been internationally recognized as for his efforts to promote “peace.”  Only now are we able to put all the pieces together to truly understand the crusade that is Senator/Vice President/SNL Host Albert Gore, Junior.

He is trying to save humanity from annihilation by an advanced race of extra terrestrials who are uber-concerned about our carbon footprint.

In a stunning and not-at-all-insane report from the Islamic Outreach Authority (formerly known as NASA . . . you know, those guys that used to do stuff like fly people to space before we decided it best to rely on our buddies the Russians), it was revealed that the likely and 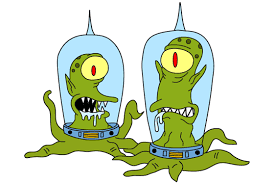 totally understandable outcome of our tailpipe fumes and air fresher sprays would be that aliens from an advanced civilization would detect it and, of course, blow us up.  I mean, when you think about it – I mean really THINK about it in a Nobel-prize kind of way – how could you reach any other rational conclusion?

Alien Kang – “Kodos, look over there, in that Quadrant . . . that blue planet there.  Yes, zoom in . . . there.  Flirking Shmit man, they’re using INCANDESCENT BULBS.  Doesn’t that filthy race know what kind of damage that does to their environment???”

And don’t think they’ll hesitate.  We’re nowhere near as peaceful as Alderran, and you know what happened to those guys.

But Al Gore has KNOWN this.  Think about it – pioneering an advanced communications system like the World Wide Web, saving the Space Agency, and working toward peace.  He knows what’s coming, and he’s doing everything he can to save us.