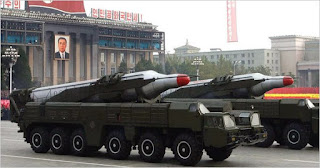 Until now I have stayed away from posting anything from the wiki leaks fiasco! It is the opinion of this blogger that the Wiki leaks folks should be arrested,and, their sight shut down-after all D.H.S. is already shutting down domains that share copyrighted material illegally-obviously all the files they are sharing are stolen classified documents!!

“Iran Fortifies Its Arsenal With the Aid of North Korea”

In this article the authors assert that Iran has obtained fro m North Korea missiles capable of striking the capitals of Europe and even-this might not be so bad- take out Moscow !

Former President George Bush was widely ridiculed for having called  Iraq,Iran,and north Korea an “Axis of Evil”. In fact the BBC reported his “controversial” assessment of these rogue states in this lurid headline…

saying that …
“Mr Bush’s bellicose remarks about North Korea, Iran and Iraq have raised concerns in Europe that the war on terrorism may spread in terms of geography and nature”

Seems to me that Mr. Bush has been proven right!! In the last few days we have seen the idiot ruler of North Korea shell a South Korean Island-killing two civilians and two South Korean Marines-destroying property and terrorizing the world!


In the mean time the tyrannical government of Iran has suppressed all forms of dissent,killed an innocent teenage girl, and set that country back 60 years!!


The left criticized Mr Bush for being “bellicose” and yet they are strangely silent when the murderers in Iran and North Korea perpetrate their crimes. It is true that they report-with seeming reluctance- these events ,but, they never launch into the same sort of personal attack,or, character assassination, that they reserved for Bush-or for that matter-any conservative that stands up and calls these psychopaths what they are evil- go figure!


Yes as the world stands on the precipice of war. As North Korea gives a new definition to “Bellicosity”, and, Iran procures more powerful missiles-obviously with the intent to load them with nuclear warheads- it appears to this writer that George Bush was right to call these rogue regimes exactly what they are “An Axis of Evil”!!!