OK, I missed this little diddy yesterday. Seeing this first thing in the morning, I’m glad I don’t eat this early. They even have pins we can buy, proclaiming our new belief system.

I thought “Rev What’s his face” (Yes, I know his name, I have just banned it from my vocabulary) was his spiritual leader. Shouldn’t he be Barry’s DDRA? Oh ya, that won’t work. The guy he’s been praying with in church for 20 years hates my guts because I’m a white guy.

Here’s CNN for you 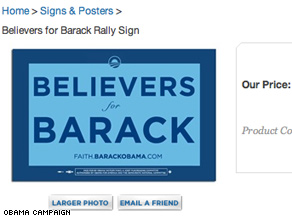 “Believers for Barack rally signs and bumper stickers, along with all Pro-Family Pro-Obama merchandise, are appropriate for people of all faith backgrounds. We’ll soon be rolling out merchandise for other religious groups and denominations, but I wanted to get this out to you without delay,” he adds.

“He that adds” is again Deputy Director of Religious Affairs Paul Monteiro. I want a bumper sticker. I’ve been looking for something to cover up the “Jesus Saves” thing on my car. It is getting kind of old, you know, that whole Jesus thing. After 2000 years, I think it’s time for Change!