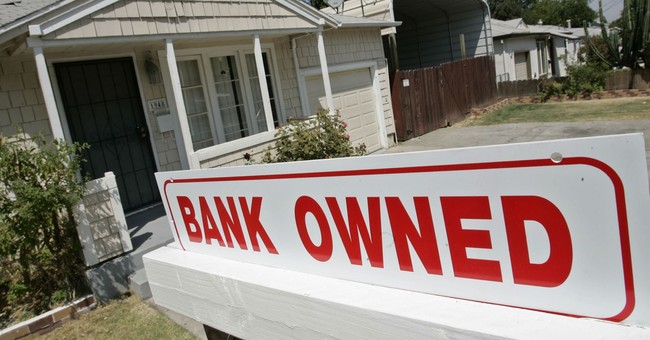 FILE- This Aug. 14, 2007, file photo shows a sign of a house under foreclosure in Antioch, Calif. As home values plummeted after the housing bubble burst in 2007, many borrowers with exotic types of loans were stuck, unable to refinance as lenders began to tighten their lending criteria. That set the stage for cascading mortgage defaults. (AP Photo/Paul Sakuma, File)

Under the CARES Act, which was recently passed by Congress to provide economic support to businesses and individuals during this pandemic, homeowners were given the flexibility to delay their mortgage payments through forbearance plans for up to a year if needed.

While this relief was critical to Americans across the country who had their hours cut back or lost their jobs entirely, it has left mortgage service providers on the hook to pay for this government-required forbearance program. For hundreds of small mortgage servicers and the thousands of Americans that they employ, the brunt of this financial burden may be too much to bear. And, the result of this burden will negatively impact homeowners.

The federal government, which is requiring these businesses to take on this cost, should step up and provide support to these companies in the form of a liquidity facility that would not go into servicers’ coffers but would directly support the payment of homeowners’ principal, interest, insurance, and taxes.

The Mortgage Bankers Association is reporting that requests for forbearance on mortgages are increasing every week, with that the total number of loans in forbearance jumping from 2.73% to 3.74% during the week of March 30 to April 5, 2020 alone. It is a time for the government to step up and work to stabilize the mortgage lending and servicing markets, as they have done in the past, or risk a housing crisis that could be worse than 2008.

While Federal Reserve Chairman Jerome Powell and Treasury Secretary Steve Mnuchin have indicated they are keeping a close watch on issues facing mortgage servicers, we aren’t seeing either of them taking steps to provide relief to nonbank mortgage service providers. Why aren’t we seeing key members of the Administration rise to address this looming crisis?

On top of this, the director of the Federal Housing Finance Agency (FHFA), which oversees Fannie Mae and Freddie Mac, completely dismissed the need for a federal intervention into the mortgage market. This is despite the fact that an estimated 25 percent of American homeowners are expected to request a forbearance on their mortgages, and that the loan servicers will be required to make payments on behalf of homeowners in the forbearance program.

Worse yet, the FHFA director seemed to indicate that he didn’t care if small mortgage service providers were put out of business as a result of this crisis, a worrying signal to servicers and homeowners across the country. This would undoubtedly result in a loss of jobs but would also create uncertainty in the housing market in a time when the federal government should be providing economic stability. This is not the time to sit idly by as mortgage companies fail and homeowners have their service disrupted and transferred to another company. Servicing transfers are not easy on anyone – most importantly, it’s a confusing process for homeowners. Americans have enough disruption and uncertainty in their lives right now. The government has the power to ensure homeownership and the mortgage servicing process remain stable.

Sadly, if the news out this weekend about JP Morgan Chase restricting access to loans is any indication, the Administration won’t have to wait long to see the devastating impact their inaction will have on the housing market.

Today, the federal government maintains a conservatorship over the major mortgage providers, Fannie Mae and Freddie Mac, and holds extensive regulatory power over these companies. This gives the government the ability to direct the actions of these firms and exert pressure on these organizations to achieve federal housing policy goals.

Given this history and their critical role in the housing market, it is disappointing to see the federal government, particularly Treasury Secretary Mnuchin, the Federal Reserve, and the Federal Housing Finance Agency (FHFA) relinquish their responsibility and take a “wait and see” approach to the current threat to the stability of our housing market.

The federal government plays a key role in stabilizing the housing market while assisting homeowners in need of relief. The easiest and most efficient way to do this would be for the Treasury Department to set up a liquidity facility to ensure that mortgage service providers can keep their doors open. If the Treasury Department does not rise to meet this challenge, it will be incumbent upon leaders on the Senate Banking Committee, like my home-state Senator Thom Tillis, to push for a legislative fix.

The consequences of inaction could rival the housing crash of 2008 and will cripple efforts to restart the economy once the threat from COVID-19 has passed. Time is short, and the federal government needs to step in immediately to prevent an entirely avoidable economic disaster.

Ted Alexander is a member of the North Carolina State Senate.

The Narrative Is Changing Again on Gas Prices
Townhall
What fresh Snell is this? Purported lawyer gets dragged by Twitter for claiming Maggie Haberman likely committed misprision of felony
Twitchy
Brian Kemp Goes for the Jugular as Stacey Abrams' Campaign Continues Its Freefall
Redstate
The Morning Briefing: The Drag Queens Hanging Around Kids Are Skeeving Me Out
PJ Media