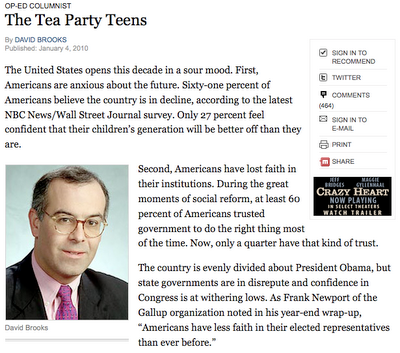 I’ve never paid much attention to David Brooks. I can’t see myself being thought-policed by a man still wearing circular spectacles from 1995. But that’s just me. I’m one of the dumb masses.
Brooks has built himself as an intellectual Republican. He disdains the conservative movements. We’re only ill-educated, redneck throngs that his party must put up with to their great dismay and disgust. As long as we keep voting Republican and keep our mouths shut, then he’ll suffer through a few handshakes as long as he’s gloved and armed with disinfectant.

Truth is, David Brooks is one of the last fringes of snobbery clinging to the thread of a class trying to be important within the liberal circles by creating a smaller pond. They couldn’t hack it against Lefty showstoppers like Bill Maher and Katie Couric and Comedy Central, so they cleaned out the conservative piranhas from the Republican pool and jumped in. Conservatives – whether Democrats, Independents, or Republican – have made due with Republican Royalty table scraps for years. Not because we don’t demand more. It’s because we’re too freakin’ busy taking care of ourselves, working our jobs, keeping this country running, and paying all the taxes so David and his comrades can sit at their special tables in their special restaurants sipping their special coffee and smacking their unspecial mouths about what ignoramuses we all are. And we’ve done nothing to stop it because….well, we’ve got better things to do. Like living.

Finally, at long last, conservatives have reached the end of their patience.

And how does that make David Brooks feel? Apparently, superior. Of course, he feels superior all the time so nothing should be upsetting his apple cart. The Tea Party Movement, however, is.

The public is not only shifting from left to right. Every single idea associated with the educated class has grown more unpopular over the past year.

Golly, us here unedumated pursn’s are startin’ to talk and stuff. Its’a still a free country, ain’t it? Uncle Jed says so.

Requirements for the educated class: ignore opposing evidence, silence dissenting opinions and studies, blind yourself to record-breaking cold temperatures, stick your fingers in your ear when anyone talks about the fraudulent data, and try the “lalalalal! I can’t hear you! lalalalala!” as the other half of the scientific community denounces the findings. In other words, stay ignorant.

The educated class supports abortion rights, so public opinion is shifting against them.

Educated people kill their own children. Devaluing life and ridding the world of our future eggheads is the smart thing to do.

The educated class supports gun control, so opposition to gun control is mounting.

Educated people so love gun control. That is why they don’t carry guns but hire bodyguards to do it for them.

The story is the same in foreign affairs. The educated class is internationalist, so isolationist sentiment is now at an all-time high, according to a Pew Research Center survey. The educated class believes in multilateral action, so the number of Americans who believe we should “go our own way” has risen sharply.

It’s the educated class in the fields fighting two wars while President Bend Over plays rounds of golf. Meanwhile, men walk onto airplanes and light their shorts on fire, terrorists are released back into Yemen to be terrorists again, and if captured after killing thousands of Americans, we pay for the terrorists’ attorneys and hold public trials. If we went along with that in silence we’d truly be idiots.

A year ago, the Obama supporters were the passionate ones. Now the tea party brigades have all the intensity.

A year ago, the Obama supporters were the ones high on emotion. Like all drugs, it wore off leaving a country with dry mouth and a hangover. The Tea Party Protesters have always been intense. You, and those educated pythons with your camel-like tendencies of spitting on anyone within reach, had simply not been listening. Now, suddenly, you are. In other words, you’ve been willfully ignorant. Yet again.

The tea party movement is a large, fractious confederation of Americans who are defined by what they are against.

They are defined by what they are for – the individual.

They are against the concentrated power of the educated class.

That sounds about right. We’ve got national debt careening out of control that even China says the entire wealth of the world can’t sustain. What do our friends in Washington do? They pass more spending legislation, legislation to support their special interests, legislation to pad their own pockets, legislation so sodden with pork fat it’s causing sporadic blood clots to any Congressional aide who touches it.

That is your passion. That is your goal. Not the welfare of this nation or it’s people. You, David, are only concerned about you. For that, I shan’t listen to another pompous word. Or, better yet, spoken in my native uneducated tongue, “lalalalalala! I can’t hear you! lalalalalala!”

Liberal Lawyer: Alec Baldwin Is Responsible for Movie Set Shooting. Here's Why.
Townhall
'Former Obama guy loses' his SH*T in thread about DeSantis 'PREPARING FOR A BREAK FROM THE FED GOVT.' for reactivating FL State Guard and ROFL
Twitchy
A Visibly Sick Joe Biden Blames Kissing His Grandson, Insults Everyone's Intelligence on the Economy
Redstate
Three Teens Who Escaped From Aussie COVID Camp All Have One Thing in Common, and It's Not the Virus
PJ Media