the Thrill of the Fight 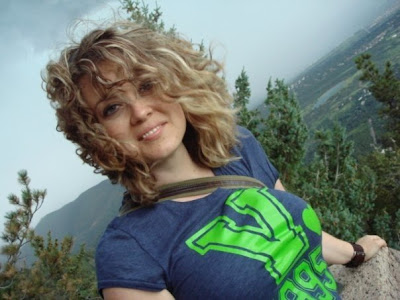 You look different, he said.

It might have been the new shirt from Target. Or maybe it’s the wind. Either way, despite my aversion to the word “change”, I’ve had some. A friend of mine, and one of my blog readers, sent me a direct message on Twitter today about a recent photo I posted.
“Your countenance has changed. Sarah, Ayn Rand, perhaps a guy, perhaps you’re older-don’t know,” he said.
Whatever has happened, it isn’t a guy. Look at how fast we can narrow our choices! Was it Sarah Palin? Reading “Atlas Shrugged”? My new zest for teff bread? Perhaps we’ll never know. There are mysteries in life that compel educated men to dig in the dirt with little toothbrushes. And still, they only have guesses and conjecture.

I gave it a little thought. A little. And with me, that means I dissected his words into letters and then into sounds and then into groanings of a primal, medieval form.
“You’re blogging increased dramatically. Changed from personal stuff to natl/world matters,” he said. “Definitely more driven. Like somebody plugged you into a light socket. Olderness makes people more production oriented. I’ve observed.”

So I looked older? I’m not going there.
Actually, his thoughts sparked my thought bubble, my light bulb, my zing of understanding. Being driven. I had been thinking about that for days.

Yesterday, I got a call from a friend. It was one of those calls where you instantly know they are frustrated, not with you but with life. Pleasantries are disposed of. Instead they jump right in with, “Have you ever experienced…”
My friend had a problem of progress. He viewed his life, his accomplishments, his economic and personal status, and wanted to achieve more. In pre-Obama, pre-Lefty extremism America, you considered this aversion to status quo an attribute. Reach for those stars. Succeed. Be all that you can be. Success begets success. Those that achieved opened roads to other achievers. Trickle-down economics still dripped.

In all honesty, I’m not so sure we’ve completely given up the dream. We still want success. We want fame (in moderation) and fortune (in a Swiss bank account) and the good life. We want the happy ending, the thrilling beginning, and the comfy middle. We’ve forgotten, however, it required a fight. Or maybe our competitive muscles simply atrophied.

I don’t know if I’m sandwiched between lazy generations or it’s basic misconception. We’ve been taught you’re special for being a color, not a character. Different is only good in thus, thus forms. Individuals outside the box, angling their view around current culture – from questioning global warming to Matt Damon’s political prowess – should be shunned. And for too long, shunned we’ve stayed.

Yesterday, I told my friend, “Personally speaking, I don’t know when I got the ignorant idea life was suppose to be easy. When did I decide success should come because I was ready for it?” I wasn’t raised with that mentality, but my frustration at the fight ahead revealed the ugly truth: I had entitlement issues, too.

So life is hard. Yeah. It’s universally known, printed on coffee mugs and embroidered on pillows. I won’t be recognized as more than a state writer because I want it. That takes earning. And that’s, actually, how I want it.
It won’t come from catching a break. It’ll come from writing a few hundred thousand more words, reading my thesaurus like a Dean Koontz thriller, losing innumerable nights of sleep because inspiration always hits at midnight, and working for it until adjectives produce beads of forehead perspiration.

So, yes. I look different. Perhaps it’s the competitive glint back in my eye. Perhaps it was a speck of dust. Whatever he saw, I feel it, like a growl rising from my throat. I’m sick of being silenced, sick of the intimidation, sick of being spurned for my beliefs. And when individual freedom is on the line, losing gracefully is only losing.

I’m so ready for a fight. Cue the cheesy Rocky music.