Reality Check; Terrorists Are Real and They Are Evil

Domestic issues justifiably dominate the news cycle. But for all those who trivialize terrorists and the terrorist threat, you might want to take a moment and listen to an Al Qaeda torture victim.

This torture victim of Al Qaeda is speaking out for the first time. His name is Khidir and he was six when he was abducted. He spent two years in captivity before being rescued. 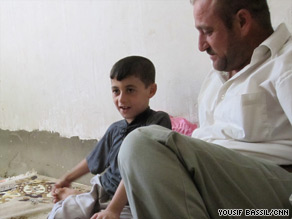 This was his ordeal:

“They beat me with a shovel, they pulled my teeth out with pliers, they would go like this and pull it,” said Khidir, now 8, demonstrating with his hands. “And they would make me work on the farm gathering carrots.”

What followed was even more horrific, an ordeal that would last for two years in captivity. Khidir and his father spoke to CNN recently, more than half a year after his rescue by Iraqi police.

“This is where they hammered a nail into my leg and then they pulled it out,” he says, lifting up his pant leg to show a tiny wound.

He says his captors also pulled out each of his tiny fingernails, broke both his arms, and beat him repeatedly on the side of the head with a shovel. He still suffers chronic headaches. He remembers them laughing as they inflicted the pain.

“I would think about my mommy and daddy,” he replies, when asked how he managed to get through the agony.

According to Secretary Napolitano, I guess we should call this a “man made disaster”. We aren’t supposed to use the “T” word anymore. Sophisticated intellectuals are running the show now and they know that man made disasters are just a byproduct of our arrogant, imperialist and capitalist culture. There is no innate evil in this world.

Intellectuals understand that if we didn’t have a military base in Saudi Arabia and if we didn’t export McDonalds to the Middle East, this six year boy would not have nails hammered into his leg and his teeth pulled out with pliers. The enlightened era of liberal governance continues.