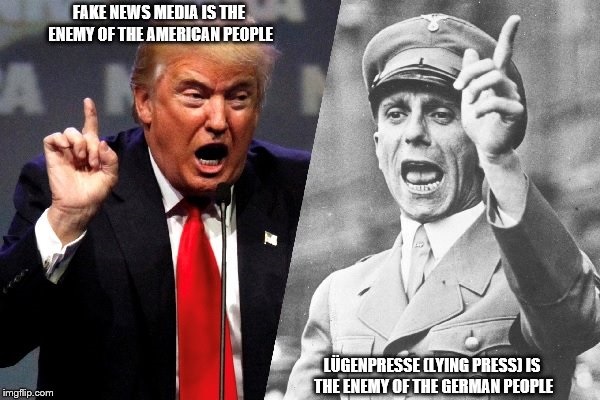 “If you repeat a lie often enough, people will believe it, and you will come to believe it yourself” is a law of propaganda often attributed to Hitler’s Minister of Propaganda, Joseph Goebbels. Though never proven to be spoken or written by Goebbels, these words are a reflection of his philosophy about how the use of propaganda can sway the masses.

As the man who once kept a copy of the book, My New Order — a collection of Hitler’s speeches — on his bedside, Trump has proven to be a man who can appreciate the power of propaganda and its ability to shape public opinion to his advantage.

Since the days of his 2016 campaign and continuing still today, Trump has relied on one of the propaganda tools used by Joseph Goebbels during the rise of Nazi Germany by referring to unfavorable news media as “Fake News.” Goebbels called the media Lügenpresse which translated is “lying press.”

Lately, Trump has doubled down on another propaganda strategy of Joseph Goebbels by referring to unfavorable media as the “enemy of the American people.” It was during the reign of the Third Reich that Goebbels released his “Ten anti-Jewish Commandments” where he called the Jews “a sworn enemy of the German people” who posed a risk to Adolph Hitler’s vision for Germany.

According to an Ipsos poll released yesterday, a disturbing number of respondents expressed support for granting Trump the authority to “close news outlets engaged in bad behavior,” and an equally disturbing number agreed with the sentiment that the news media is “the enemy of the American people.

More disturbing, however, is how the survey breaks down by party affiliation. While the overall response to the question granting Trump the authority to close news outlets was only 26 percent favorable, 43 percent of Republicans favored giving him this tyrannical power. Likewise, 29 percent of respondents agreed that the media is the enemy of the American people, but nearly half (48 percent) of Republicans agreed.

Overall, 85 percent of respondents agreed that a free press “is essential for American democracy” and 68 percent believed the media should be protected from government pressure. While those numbers are majorities, the fact that anyone would accept the ideas that freedom of the press isn’t necessary to protect liberty and that the government to have the power to pressure the media is unacceptable to this constitutional conservative.

The results of this survey confirms two indisputable facts: Trump has succeeded in molding the GOP into his own image, and his use of the same propaganda principles used by Joseph Goebbels is destroying our Constitutional rights and edging America ever closer to becoming Nationalist Socialist state.