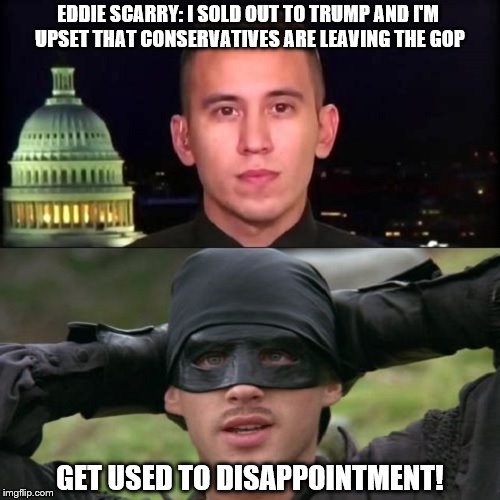 “When an anti-Trump voice in the media announces he’s leaving the Republican party but no one’s there to read it, does it make a sound?”

This pathetically lame attempt at humor was the opening salvo in a pro-Trump opinion piece written for the pro-Trump Washington Examiner over the weekend by Eddie Scarry about Republicans in the media who are leaving the party.

Despite Scarry’s careless and lazy interchangeable use of the words conservative and Republican—they’re not the same thing—he claims that Boot and others like him should be ignored because “It isn’t newsworthy when a conservative in the media hates Trump” and that “hating Trump in the media comes cheap.”

Using a style all too common whenever #Cult45 defends Trump, Scarry fails to address the reason why Boot and others like him are lining up to leave the GOP. Instead of defending the track record of GOP successes—a tough task since there isn’t one—Scarry uses the tactics most often employed by the man in the White House by attempting to discredit Boot as someone “most people don’t know.”

Besides the fact that I know who he is, Max Boot is a Senior Fellow in national security studies at the Council on Foreign Relations, has been an editor for Christian Science Monitor and The Wall Street Journal, and has authored several books including a New York Times best seller. Scarry, for the record, used to cover media and politics for Mediaite.com and recently authored a pro-Trump masterpiece entitled, Fraud and Fiction: The Truth behind Fire and Fury.

But here’s the ultimate pro-Trump clincher: Scarry claims that Boot and those like him didn’t leave the GOP; they “left it behind when Trump transformed it.” Scarry also boasted how “[Conservatives] didn’t quit the GOP. The GOP’s voters fired them for contributing nothing valuable to the party since at least 2010.” An ironic claim when you realize that it was conservatives and the TEA Party that gave the GOP control of the House in 2010 in a landslide.

As growing numbers of conservatives and Republicans—they’re not the same thing despite Scarry’s sloppy interchangeable use of the words—rush the fire exits to avoid being destroyed in an inferno started by the political arsonist in the White House and fueled by the GOP establishment, the Scarrys, Ingrahams, Coulters, and Hannitys of the so-called conservative media have chosen the wide gate leading to the pro-Trump echo chamber. It’s their right to do so, but they will have no one to blame but themselves when there’s nothing left of the GOP but a pile of ashes.

A parting thought. According to Scarry, Trump has transformed the GOP, meaning that the Party no longer exists. If true, why does he feel the need to discredit those who choose to leave something that he says no longer exists? Could it be that he is disappointed that his sellout to Trump’s brand of faux-conservatism isn’t panning out as he had hoped?

Which reminds me of a line from the 1980s classic movie, The Princess Bride. In the Age of Trump, Mr. Scarry probably needs to…