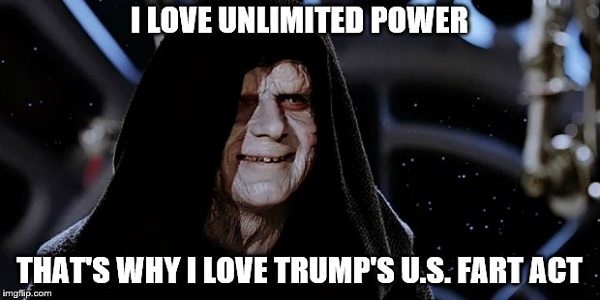 Ever since Trump officially launched his self-declared trade war earlier this year, countries around the world have been lining up to retaliate against his arbitrary use of tariffs—the Senate Finance Committee recently called it “knee-jerk impulses”—in his pursuit to advance his anti-free trade, protectionist agenda.

In January, Trump lobbed the first economy-killing grenade when he imposed tariffs on imported solar panels and residential washing machines. Weeks later Trump launched a second round of attacks with across-the-board tariffs of 25 percent on steel and 10 percent on aluminum.

Following the second round of attacks, Trump’s trade advisor Peter Navarro appeared on FOX Business Network to assure America that Trump knew what he was doing and that fears of a trade war were misplaced because no country would dare retaliate for Trump’s tariffs.

Peter Navarro on tariffs: I don't believe any country will retaliate https://t.co/HVkcCz9iLB

Obviously, with retaliatory tariffs being leveled by Canada, China, Mexico, and the EU, Navarro was not only wrong in his conclusion, but we now find ourselves in the throes of a trade war, with casualties here at home such as we witnessed recently with Harley Davidson’s announcement to move some production overseas to avoid tariffs.

Additionally, the price of steel has doubled, causing layoffs and possible business closures for smaller businesses. For example, last week Mid-Continent Nail announced layoffs for 60 of its 500 employees and may be forced to relocate to Mexico to survive Trump’s trade war.

But don’t worry. Trade wars are “good” and “easy to win.”

Already guilty of abusing his authority to level tariffs—he can only do so as a matter of national security—and in true “Damn the torpedoes! Full speed ahead!” fashion, Trump is working on a bill he hopes Congress will consider that would shift tariff powers from the legislative branch to the executive branch.

The U.S. Fair and Reciprocal Trade Act would give the president power to level tariffs anywhere, anytime, and for any reason. Former White House Communications Director Anthony Scaramucci refers to Trump’s proposal acrostically, calling it the U.S. FART Act because it “stinks.”

WTO has its flaws, but the “United States Fair and Reciprocal Tariff Act," aka the U.S. FART Act, stinks. American consumers pay for tariffs. Time to switch tactics. https://t.co/OfyOFA1neU

Personally, I think a better nickname for it is the Emperor Palpatine Act because it gives Trump…

I would like to believe, as the editorial board of National Review does, that Congress would never consider surrendering its Article 1, Section 8 power to “lay and collect Taxes, Duties, Imports, and Excises” to any president, especially Trump. But when you consider that they already allow Trump to abuse his authority to impose tariffs—national security, remember?—not to mention that efforts to rein him in have been shot down by Mitch McConnell and other Republicans sold out to Trumpism, I’m not so sure FART wouldn’t fly if given its wings.

Case in point: We need only remember how Sen. Bob Corker (R-TN) successfully led the charge to surrender the Senate’s Constitutional authority to approve treaties to Obama during the Iran deal to know just how feckless Republicans can be when dealing with unpopular issues.

As Court Rules Against Actor-Producer Kevin Spacey, There Could Be Ramifications for Alec Baldwin
Brad Slager

ICYMI: Another 'Indigenous' Person Was Exposed As a Total Fraud
Townhall
Dem Rep. Jayapal asks 'what part of Build Back Better are you most excited for?'
Twitchy
Dance With the Guy Who Brung Ya: Democrat Freak-out Begins Over 2022
Redstate
Whose Land Did Native Americans Steal Before Europeans Stole It From Them?
PJ Media