Gov. Andrew Cuomo takes ERPO laws up a notch; will use teachers to seize guns 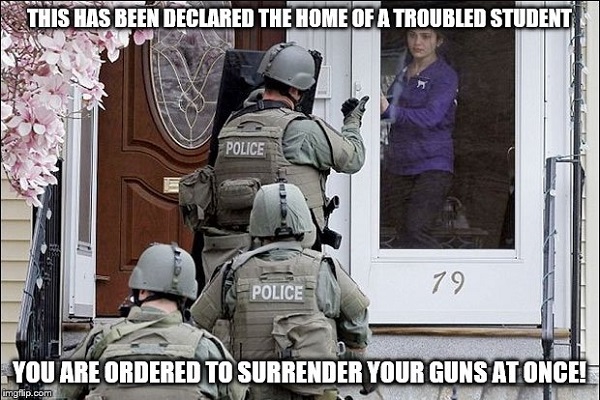 The anti-Second Amendment hysteria by left-wing extremists and the media—but I repeat myself—has reached a fever pitch following recent incidents of gun violence at public schools as it breathes new life into a punch list of Constitutionally questionable laws designed to completely disarm America.

One such law gaining momentum is the Extreme Risk Protection Order (ERPO). By taking one part “big government knows best” and adding a heaping cup of “for the children” with just a dash of “mental health crisis” for seasoning, progressives in both parties have created the perfect recipe to satisfy their appetite for killing the Second Amendment and denying us our God-given right to life, liberty, and the pursuit of happiness.

An ERPO empowers family members and the police to seize guns from anyone they feel poses a danger to themselves or others simply by obtaining a judge’s order—an order that doesn’t require testimony from the “accused” which is a violation of our Constitutional rights. No warrant. No charges. No arrests.

After the Parkland, FL high school shooting earlier this year, Gov. Rick Scott—currently the GOP candidate for US Senate—joined forces with Republicans who had already joined forces with Democrats to pass a host of anti-gun laws, including ERPOs. In the months that followed, GOP governors in Vermont and Maryland also passed ERPO laws.

Earlier this year I wrote in an article about how mental illness is being used to deny gun rights, and I shared a story about an ERPO being used by police in Seattle, WA to forcefully confiscate the guns of a man because his neighbors didn’t like that he “stared” at them while legally wearing a holstered firearm.

Besides the fact that ERPOs are becoming one of the greatest threats to our Constitutional rights, they are also serving as the grease for the slippery slope we are taking toward tyranny, as we see in the recent proposal by NY Gov. Andrew Cuomo.

Cuomo plans to introduce a proposal to the state legislature for a law that will allow teachers to petition a judge to remove guns from the homes of “troubled students.” Under his expansion plan for ERPO, teachers and school administrators would be granted legal standing to petition a court to remove firearms from the homes of students considered a threat to themselves or others. The teacher’s union loves this idea.

If it becomes law, the next time a child acts up in a NY school SWAT teams could be knocking down the door where they live to disarm the parents. And with the way ERPO laws are gaining acceptance—including in Washington DC—it could happen where you live too.