Like Hillary, Trump finds phone security “too inconvenient” to worry about 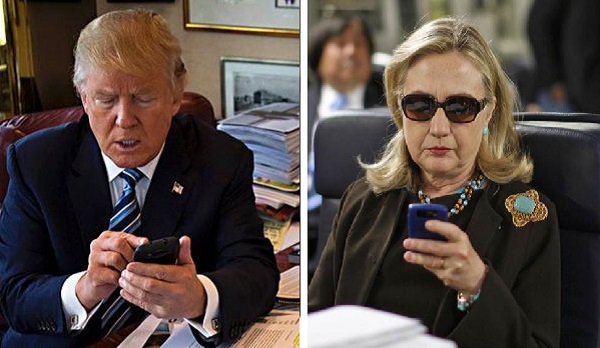 During the presidential debates, Donald Trump routinely attacked Hillary Clinton for using a private email server during her time as Secretary of State. Though he changed his mind after winning the election, Trump went so far as to promise the appointment of a special prosecutor to investigate her illegal activity.

With chants of “lock her up” echoing through the adoring crowds attending his rallies, Trump often reminded his supporters that Hillary’s email-server scandal was likely criminal due to the serious threat it posed to national security.

Hillary’s “extremely careless” behavior, as the FBI called it, proved to be a valid concern. During their investigation, the FBI confirmed that Hillary’s email servers as well as her cell-phones were repeatedly targeted by hackers. Due to the lack of proper security features, the hackers may have had some success.

Trump say he's sticking w/ a potentially hackable iPhone because it is "too inconvenient" to change — same exact argument "Lock her up" Hillary Clinton used to justify using a private email server.

According to senior officials in the White House, Trump is using a cell-phone that isn’t equipped with the vital security features considered necessary to protect him from hacking or surveillance.

Trump uses two iPhones—one for voice calling and one for his Twitter fixation—and aids have urged him to swap out the Twitter phone on a monthly basis. However, Trump has rejected these security-check requests, calling them “too inconvenient” to comply with, which is the same excuse used by Hillary when her cell-phone equipment was investigated by the FBI.

Apparently, Trump often goes up to five months between security checks on his Twitter phone. It’s unknown how often Trump’s voice phone is swapped out, but since it has a camera and a microphone, it makes Trump susceptible to hackers who can use those features to monitor his movements.

Trump has the authority, of course, to override or ignore the advice of his staff on this issue but doing so is irresponsible and creates a national security risk. Just like Hillary!

Gloria Allred Explains Why Alec Baldwin Is Responsible for 'Rust' Movie Shooting
Townhall
'Former Obama guy loses' his SH*T in thread about DeSantis 'PREPARING FOR A BREAK FROM THE FED GOVT.' for reactivating FL State Guard and ROFL
Twitchy
A Visibly Sick Joe Biden Blames Kissing His Grandson, Insults Everyone's Intelligence on the Economy
Redstate
Three Teens Who Escaped From Aussie COVID Camp All Have One Thing in Common, and It's Not the Virus
PJ Media