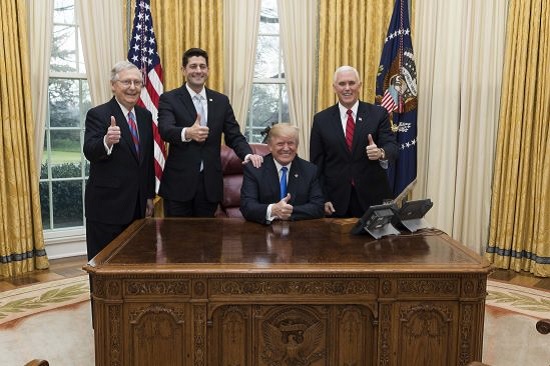 As I wrote yesterday concerning the renewed interest by Trump and the GOP in congressional term limits, they are pulling out all the stops to save the party as the Blue Tsunami creeps ever closer to the November shores.

Having all but abandoned their one-and-only success of the past 18 months—tax cuts—in an attempt to ward off Trump’s impeachment, Republicans have turned their attention to their ace-in-the-hole every election year—conservatives.

Sadly, this strategy has had some limited success as groups like the House Freedom Caucus have been promoting a new brand of conservatives, Trump conservatives, or as I like to call them Trumpservatives. Despite this development, it remains unclear if the GOP will succeed in fooling enough of the base they have abandoned to prevent their annihilation in November.

Leaving no conservative stone unturned, and with an unlimited willingness to lie to cover up their trail of broken promises tears, Donald Trump and Rep. Kevin McCarthy, the man slated to replace Paul Ryan as House Speaker—or minority leader after November—are shouting from the rooftops that they are ready to get serious about cutting spending.

Under a seldom-used law known as the 1974 Impoundment Act, the same Republican lying liars who created the impending financial Armageddon following their budget surrender to the Democrats are proposing a whopping . . . wait for it . . . $15 billion cut in previously approved spending. This equates to less than one-half of one percent of government spending this year.

See? They really are serious about the budget.

Besides the fact that this budget gimmick known as “rescission” has only resulted in a meager $25 billion in spending cuts since the Impoundment Act’s inception, big-ticket items like military spending, entitlements, and interest on the debt can’t or won’t be touched. In fact, the proposed cuts aren’t even coming from the recent spending bill Trump and the GOP “reluctantly” passed. If approved, the cuts will come from untapped accounts in past budgets.

Just as we witnessed with Ted Cruz’s re-election stunt proposing to make the recently passed tax cuts permanent—they expire in 2025 for individuals—and the recent failed attempt to pass a balanced budget amendment in the House, this spending cuts proposal is nothing more than the classic politics of distraction used by the GOP every election year when they need the votes they have neither earned nor deserve.