What do Al Gore, Hillary Clinton, and Donald Trump have in common? 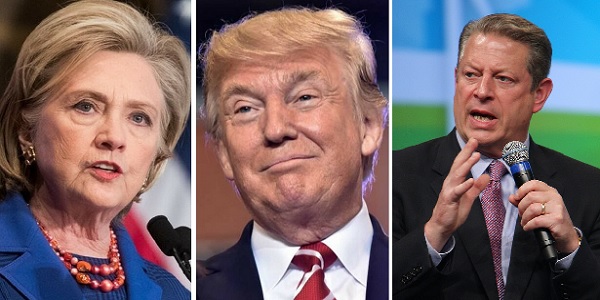 What do Al Gore, Hillary Clinton, and Donald Trump have in common with each other? Well, besides the fact that they are life-long liberals, all three of them have called for the elimination of the Electoral College following elections where the loser received more popular votes than the winner.

Oblivious to the fact that he would have lost to Hillary in 2016 without the Electoral College, Trump expressed his support for using the popular vote to elect the president in a conference call with his morning intel team at Fox & Friends—a 30-minute torture session that included his worn-out “fake news” talking points, an untimely comment confirming his relationship with Michael Cohen, a rehashing of his 2016 campaign, and pretty much anything else that entered his mind.

“Remember, we won the election. And we won it easily. You know, a lot of people say ‘Oh, it was close.’ And by the way, they also like to always talk about Electoral College. Well, it’s an election based on the Electoral College. I would rather have a popular election, but it’s a totally different campaign. It’s as though you’re running — if you’re a runner, you’re practicing for the 100-yard dash as opposed to the 1-mile.

Ironically, but not unexpectedly, Trump thought the Electoral College was the greatest thing since sliced bread when it gave him the White House.

The Electoral College is actually genius in that it brings all states, including the smaller ones, into play. Campaigning is much different!

Putting aside Trump’s cluelessness of the Constitution and his frightening habit of saying whatever stupid thing enters his mind—his followers call that “telling it like it is”—cries to eliminate the Electoral College by politicians and others hooked on power and control continue to grow. Unfortunately, in their never-ending quest to destroy every Constitutional limit to their tyrannical goals, people like Trump are seeing some success.

While the Constitutional (Article II, Section I) mandates the Electoral College, it leaves the details on selecting Electors up to the states. There have been law suits filed by several states over the past few years seeking a way to allow states to divvy up Electoral Votes instead of a winner-take-all assignment of votes. While their argument is that this would be a better representation of the will of the electorate, it damages the Electoral College by creating a modified version of the popular vote model.

So, how bad would it be if we went to a popular vote system?

According to the 2010 Census, the top nine most populous states have a larger total population than the rest of the states and the District of Columbia combined. With so much of the population concentrated in a small handful of states, the majority of the country would essentially be disenfranchised as politicians focused on the population centers of the country.

A popular vote sounds democratic, but as the old saying goes, “Democracy is two wolves and a lamb voting on what to have for lunch” (a quote often misattributed to Benjamin Franklin but still true).

In their infinite wisdom, the Founding Fathers created a system that guarantees that every citizen in every state would have a voice in selecting the president. They created a republic, not a democracy, and that’s why we need to fight those who want to destroy the Electoral College and the Constitution.