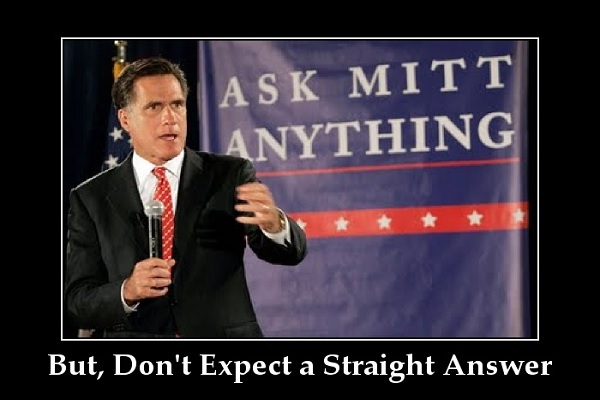 The Utah Republican Party convention was held this past weekend. Despite Mitt Romney’s failure to secure 60 percent of the vote to avoid a primary run-off, an ongoing disagreement about a new rule that allows candidates to bypass the convention to get on the primary ballot by gathering signatures instead—as Mitt Romney did—helped the party establishment pave the way for Massachusetts Mitt to replace Orrin Hatch as the next US Senator from the Beehive State.

Even though Romney didn’t need to worry about the convention, he attended in an attempt to garner the support of grassroots Republicans concerned about his obvious carpetbagger status and others who see Romney’s run as little more than an attempt to redeem his lost political glory. In that regard, Romney did not disappoint.

True to his reputation, Romney became all things to all people as he worked to appease both Republicrats and Trumplicans while playing the “severely conservative” card when necessary as we witnessed in a Q & A with delegates.

“Here’s the difference between me and a lot of other people that are running: and that is, I know how to get a group of people together. I’ve campaigned with some 40 different Republican Senators—I’ve campaigned for them, with them.

“I can get a group of them together to stand together to fight against the excessive spending that we’re seeing in Washington. I can also get Obamacare repealed.”

Repeal Obamacare? Seems to me I’ve heard something like that from a Republican before. Still, listening to Romney blather on about how awesome he is and how he’s going to bring everybody together almost makes you want to gather around the campfire, make s’mores, and sing Kumbaya, doesn’t it?

In reality, Mitt’s track record of attacking conservatives who buck the GOP establishment proves that he has more in common with Orrin Hatch than Mike Lee—despite his repeated mention of Lee’s name at the convention.

Throughout his campaign, Romney has continued to claim that he’s more conservative than Trump and Congress—a very low bar—on issues like immigration and the budget, but once again, his record tells a different story. As recently as 2014, Romney supported amnesty for illegals and making DACA permanent. And even though he now says he would support a government shutdown to get spending under control, Romney has opposed using shutdowns as leverage on important issues in the past.

As a chameleon candidate lacking any core conservative convictions, Romney will be a perfect fit in Mitch McConnell’s GOP establishment swamp we know as the US Senate. And it looks like Utah Republicans are working hard to make sure Romney gets the job.