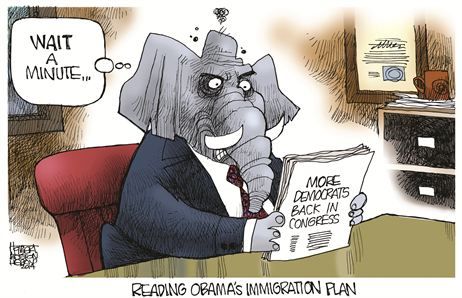 The rumor around Washington is that Obama is expected to soon announce his unconstitutional immigration plan, so the question to ask ourselves is: how will the Republicans respond?

Well, they won’t use the power of the purse—I wrote about this in a previous article—at least that’s the word from Senator-elect Corey Gardner. When asked about using budget reconciliation manuevers to bypass possible filibusters by Democrats on key Obama policies such as the immigration situation, Gardner expressed his reluctance to do pursue such action due to the possibility of a government shutdown.

By the way, [mc_name name=’Sen. Mitch McConnell (R-KY)’ chamber=’senate’ mcid=’M000355′ ] promised to use this exact tactic if America gave him a Republican majority. Of course, that was before the election. The capitulating Senate Majority Leader is now on record that he is no longer interested in using the budget to stop Obama’s illegal decrees. No big surprise really. After all, he is a member of the Gutless On Principles (GOP) Hall of Shame. You don’t earn that honor because you keep your promises.

While House Republicans say every option—including a government shutdown—is on the table to counter Obama’s planed executive action on immigration, Gardner is following McConnell’s lead by declaring that a “mature governing body” shouldn’t even consider such a move:

“There’s no time, place or purpose of a government shutdown or default,” Gardner said Friday on MSNBC’s Morning Joe. “That’s simply ridiculous and something that a mature governing body doesn’t even contemplate. We ought to make it very clear that that’s simply not acceptable. To simply say no to everything is unacceptable, but I think the President needs to do the right thing and work with Congress.”

Well of course he should do the right thing! But in light of the numerous scandals that have come from the White House, in addition to his well-established propensity to use the Constitution as his personal doormat, I think it’s safe to assume that the right thing isn’t coming from the Obama Administration anytime soon.

I am already fed up with the new Republican congress, and they haven’t even started yet! I’m tired of hearing about the things they won’t do! I want to hear what they will do! And specifically, I want to hear how they are going to fulfill the mandate voters gave when they put these guys in charge. One thing is for sure, we didn’t vote for Republicans because we wanted them to “get along.” The Democrats they replaced were already doing that.

Corey Gardner stated that “saying no” is unacceptable behavior, to which I say: Mr. Gardner, I endorsed your campaign to do just that! I want you to say no to Obamacare! No to amnesty! No to spending! [mc_name name=’Sen. Mark Udall (D-CO)’ chamber=’senate’ mcid=’U000038′ ] never said no to Obama, which is why we voted for you to replace him.

You promised to ‘shake up the Senate’ if you were elected. Well sir . . . it’s shakin’ time! Right, Jerry?