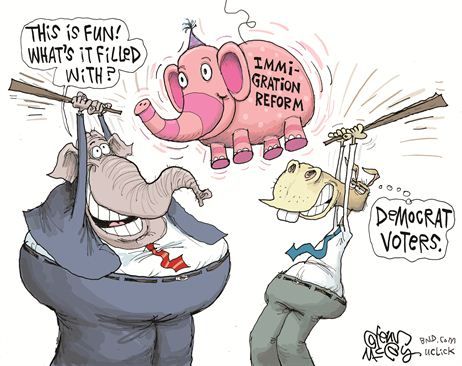 Even though they haven’t officially changed their party affiliation, some big name Democrats are using the immigration reform issue to defect to the Republican party. No longer concerned about putting another Democrat in the White House when Obama leaves, some of the party’s big guns have already gone on record in support of the Republicans in November, 2016.

“I believe that the members of Congress, many more than are directly affected themselves by the number of Hispanics in their district, will do what is right for our country. And it’s certainly right — for the Republicans, if they ever want to win a presidential race.”

“Congressman Boehner is in a box. There are about 60 or 70 of his people who are against any immigration reform. But at the same time, he knows that the Republican Party will be consigned to a minority party for a generation if they’re anti-immigration.”

“If they were smart, they would take our bill. Our bill is a good one, and if the House is talking about doing it, which they have, on a piecemeal stuff basis, that just won’t work. That’s grade school stuff, and they’ve got to get to the university level.”

Support for Republicans from the left doesn’t end there. The normally progressive, pro-liberal, pro-Democrat media is showing signs that they, too, are defecting to the Republican’s side. Just a few examples:

It leaves the Republican-led House in a tough position: pass immigration reform for the future good of the party, or, kill or water-down immigration reform to appease the voters who make up your base now and run the risk of your party becoming a minority in national elections. – CBS Miami

Whatever these senators’ motives, it’s clear that the Hispanic population is growing in many of their Southern, stronghold states, and it’s becoming increasingly hard to imagine a presidential victory without substantial Hispanic support. But it’s becoming just as apparent that far-right conservatives see immigration legislation that allows a path to citizenship for illegal immigrants as a suicidal mission. The problem is that their overwrought opposition — which may well be futile — may prove as damaging to their party as to the legislation itself. – NY Times

There are even indications that this change of heart goes beyond the immigration issue. In the 7/3/2013 issue of the Denver Post, the editorial board showed their Republican support by providing advice on how to defeat Hillary Clinton or Joe Biden—who will both be around 70-years-old in 2016—by winning the youth vote and avoiding the advanced age of the Democrats.

If the GOP is trying to connect with younger voters, it had best heed a report released last month by the College Republican National Committee, which said young swing voters viewed the party, fairly or not, as “closed-minded,” “racist,” “rigid” and “old-fashioned.”

On key issues like gay marriage and immigration, the study found the party was out of step with many young voters. Even on the economy, young voters weren’t receptive to ham-handed Republican messaging.

Republicans would do well to attend to policy and message rather than highlight an opponent’s unremarkable age.

Of course, the “be-more-like-us,” Democrat-lite approach has been tried—and failed—in 2008 with John McCain, and again in 2012 with Mitt Romney. But the point is, they care, and they really want to see Republicans succeed. You can almost hear the Republicans now:

The Border Security, Economic Opportunity, and Immigration Modernization Act (S. 744) is bad law. It will grant amnesty to millions of Democrat voters—I mean, illegal immigrants—I mean, undocumented aliens—while leaving border security to the whims of the DHS Secretary. But in the eyes of the Democrats, it’s become a reason to switch over to the Republican side of the aisle.

Take heart, G.O.P.! Nancy, Harry & Company have got your back!