Attention All Poll-a-holic Sourpusses: Being Down 6 Points Is a Nothingburger

First, the bad news. It is entirely possible that Barack Obama will be elected president of the United States (and there is a silver lining even in that).

And now the good news. Obama’s advantage in the polls is relatively small and easily reversible given the general volatility of public opinion and the particular ambivalence of the public with respect to Obama personally.

The polls said it was a tight race! 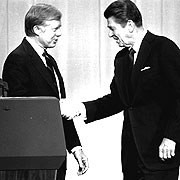 Massive swings in voter sentiment can occur in just a few days. Carter and Reagan were tied in the polls just a few days before the Reagan landslide. Bob Dole was supposed to be headed for a double-digit thumping, but lost by 9. We were also supposed to lose the House majority in 1996. GWB had a decent lead in the polls until the game-changing (and dirty trick) drunk driving story. Hell, John Kerry thought he was elected president based on polls taken ELECTION DAY.

We all have our favorite incidents about how polls can be skewed against the GOP through news stories that are framed to damage the Republican case. Never forget that the only poll that counts is taken on election day. Polls are only a lagging indicator of reaction to events. And events, from Wall Street to Waziristan, can move with lightning speed.

So let’s get back to work! (And savor the sex scandal that has erupted Mark Foley’s old district.)