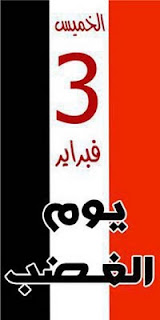 The sign, superimposed over a Yemeni flag, says “Thursday, 3 February, The Day of Anger.”

What have Yemenis to be angry about?  For starters, a president who has remained in power for over thirty years, and who has presided over a precipitous decline in just about every standard by which a nation can be judged.  Education, utilities, wages, employment – all place Yemen firmly on the bottom rung of nations.

A fair amount of this can be blamed on factors other than the President Saleh’s leadership.  Qat addiction, for instance, is a debilitating influence nationwide, with 70% of men over the age of 15 addicted to chewing the narcotic leaf, and 90% of available water devoted to irrigating it.  (This in a nation where fresh water per capita availability is well under 10% of that of developed nations.)

As if that weren’t enough, Yemen’s enduring divisions along old North/South lines, its tribal issues, and its dwindling oil reserves further complicate matters, as do the thousands of Somali refugees who cross the Red Sea monthly seeking shelter in institutions that are already stretched to the breaking point.

Even for a president who wasn’t a kleptocrat, this would be a difficult nation to guide through these difficult times.  For President Ali Saleh, however, guidance seems to take a back seat to power maintenance, which is accomplished largely by awarding family members, informants, and accomplices with government positions, the greatest benefit of which comes from the inferred authority to abuse the appointment by extorting bribes and payoffs from Yemeni citizens.  From the Coast Guard to the Border Patrol, it seems there is not a single agency of the Yemeni government that does not convert public assets to private use.  Coast Guard vessels, many of which have recently been provided by western governments like the United States, can be hired, along with crews to escort whatever trade you might like to conduct in Yemeni waters.  Prices begin at $30,000 and go up from there, depending on the options you select.  If you intend to land your cargo on Yemeni shores, you’d better pay off the Border Patrol as well, and as you move inland, you will no doubt meet an endless parade of strongmen, bureaucrats, and thugs, all of whom will require tribute.  This is President Saleh’s Yemen.

But that’s only part of it.  There is also the persistent persecution of what was formerly South Yemen, through which Yemen’s remaining oil flows on its way to market, but which receives little or none of the benefits of its income.  Villages in the South are frequently placed under seige and bombarded by the artillery of the Yemeni Army.  In this, Saleh tries to show the west that he is “serious” about denying refuge to al-Qaeda, even as he relies on that terrorist organization to attack and inform on the Shia Houthi rebels who are causing problems on his northwestern border with Saudi Arabia.

Saleh has twice promised not to seek reelection, only to run and, not surprisingly, win by “overwhelming” numbers of votes.  His latest reelection keeps him in office until his son reaches 40 years of age, the constitutional mandate for the age of a president.

Not that the constitution is anything that would bind the hands of Ali Saleh.  He seems to think he can amend it at will, deciding recently to push for a change that would allow him to rule for life.

Yemenis have plenty to be angry about.  They are hemmed in on every side by a government that, far from ameliorating the odds already stacked against them, does everything it can to increase their already staggering burden while enriching itself in every way.  Their government is a network of lies, broken promises, and dishonorable alliances that has demonstrated time and time again that it has no regard whatsoever for their well-being.  In this social contract, all the responsibility is placed on the shoulders of the citizens; none of it on the government.

So Thursday, the Day of Anger, is not lacking in legitimacy.  Under the right circumstances, it could well be a turning point in the relationship between the citizens and their government.  It is doubtful though, that the circumstances are right.  Squabbling among the opposition leaders, Qat-induced lethargy, and a familiarity with submission take their toll of righteous anger, and if Saleh’s government makes the right noises, mangages to restrain itself from shooting demonstrators, and adopts a convincingly conciliatory tone, it is likely that life, such as it is, in Yemen, will go on much as it has before.