In the wake of the mass shooting in Aurora Colorado many are still trying to get over the shock of the horrible event.  The stories of the shooting victims have made most of us come to tears, like the Six year old girl who was shot, and the man who died on his birthday.  To most of America, using this to advance a political agenda of any kind seems disgusting and way out of line.  As do I.

But not Mayor Michael Bloomberg of New York.  After the shooting, he made a press release that largely criticized both President candidates for not pushing hard enough for gun control, and encouraged others to adopt New York City’s anti – gun laws.  It shouldn’t come to a surprise that Bloomberg is pushing for less individual freedom nation wide, because he has already child proofed all of New York City with regulations on everything from how much salt you can have on French fries to what drinks you can have.  But now, Bloomberg wants the rest of us to have the same type of Nanny state he’s instituted there.  Now, he’s starting off with gun control

Mayor Bloomberg does not realize though, that murderers will most likely buy guns on the black market to commit their heinous crimes.  If they are willing to take the life of another, they won’t care if what they are using is illegal.  Also, where does it end?  If the government can take your possessions because theirs the chance you might commit a murder with it, what else can they take?  You could stab someone with a knife, should the government take our steak knives?  This is the slippery slope that shows the blatant stupidity of the arguement by Bloomberg and others for larger government.

Think about it, who do you trust more?  Yourself, or people like Michael Bloomberg to make your choices?  I think the choice is clear. 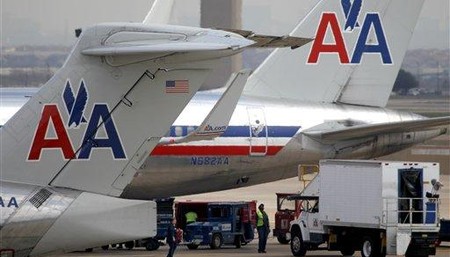 It Begins With Just Two Flights on American Airlines -- Next Thing You Know, Aircraft Are Parked
Shipwreckedcrew