The visceral reactions of Mr. Erickson over my opinions regarding Richard Mourdock are truly a spectacle. I expected anger, insults, and possibly pushback, but censorship? That one actually surprised me.

Mr. Erickson is a conservative member of the media; surely he detests the idea of censorship – at least when he or someone he agrees with is a victim of it. By reaching into my Diary and changing the content (see below), Mr. Erickson has now engaged in the same kind of censorship that conservatives who oppose the Fairness Doctrine abhor. It is not a stretch to suggest that this authoritarian attitude at least partially explains why he is backing Richard Mourdock, who also supports the Fairness Doctrine.

Before I go any further, I want to reiterate that I am a nothing more than a weekend warrior. I have never received one penny for anything I have written. Mr. Erickson’s assertion that I am employed by Mr. Lugar’s campaign is incorrect. One more time for those with selective reading comprehension: I have never received any form of compensation for the things I have written. You can take that to the bank, metaphorically speaking, of course.

I understand that Mr. Erickson is frustrated that somebody on his site holds an opinion opposite his own, but that is no excuse for censorship. It seems that when evidence is presented to support any opinion but Mr. Erickson’s, he engages in an all-out attack on the credentials of the individual, but conveniently ignores the facts. I included a picture in my last post to provide evidence to support my point, and this clearly crossed the line. Words and links irritated Mr. Erickson, but pictures (and facts) obviously enrage him – that’s why he stooped to censorship.

Mr. Erickson manipulated my post because more and more questions about Richard Mourdock’s past are coming out. It is has become obvious that Richard Mourdock did not vote in the Republican primary in 2008. The real question is who exactly did he vote for? Hillary or Obama? Curious minds want to know.

This is not the only reason voters should stop and take second look at Richard Mourdock’s record. Mr. Mourdock currently preaches extensive cuts to spending and entitlement programs, but he has not always held these views. In 1992, The Evansville Courier & Press reported: “The Republican 8th District congressional candidate has proposed a free year of college for students who graduate from high school with at least a B average…He proposed the free year of college, funded by the government, as a way to put motivation back into the nation’s educational system.”

You read that right – Richard Mourdock wanted to create an entirely new entitlement program administered by the Department of Education. Juxtapose this position with his current call to cut spending and eliminate the Department of Education and you see how drastically Mr. Mourdock has altered his stances in an attempt to take advantage of the Tea Party’s momentum. “Tea Party Opportunist,” indeed.

If Mourdock’s flip-flopping does not bother you, then perhaps his increasingly embarrassing lack of perspective might? At an event hosted by the Times of Northwest Indiana editorial board, Mourdock said: “There’s always going to be a lot of duplication. We look today at the historical setup of Army, Navy, Air Force, Marines, Coast Guard – there’s a lot of duplication and bureaucracy right there. In the 21st century is that necessary? I’m not sure that it is.”

Let me deconstruct this comment for you: in order to curtail defense spending, Richard Mourdock has proposed to completely eliminate one or more branches of the United States Armed Forces. This statement is not only foolish, but also dangerous. Our nation is at war and facing terror threats daily; suggesting that we eliminate any branches of our armed forces is irresponsible and ignorant. Let’s play a game called “What Branch Would You Cut?” Mr. Mourdock? Mr. Erickson?

Mr. Mourdock is an incredibly weak candidate, from policy to personality. He consistently showcases just how feebly he grasps important policy matters. Furthermore, Mr. Mourdock continually makes assertions that are contradictory to his previous positions. Most importantly, he has failed to raise a substantial amount of money from voters in Indiana and has relied on outside groups and individuals with outsized voices to influence the race. If elected, Mr. Mourdock will be utterly beholden to those who got him elected and their interests. Maybe, just maybe, this is why Mr. Erickson is so determined to see Richard Mourdock in office?

Thanks for coming to RedState to read how his new media guy has screwed up.

Yes, I know you came here based on a blasted out email by Lugar’s campaign to a website openly endorsing Richard Mourdock.

You can see the original post below, but are you aware of Dick Lugar sponsoring a concealed carry gun ban that got the Democrats to side with him?

For a full look at Dick Lugar’s voting record and his routine votes to bankrupt America, go here. Then decide if you really want to support him or Mourdock.

—————————————
The photo below shows the official 2008 primary election voter roll in Richard Mourdock’s home precinct. While his signature appears on the roll – meaning he voted – Mourdock declined to check a box denoting in which party’s primary he wished to vote.  Mourdock, who claims to hold the mantle of the “real” Republican in Indiana’s Senate primary, didn’t even vote in the Republican presidential primary in 2008?  Why not?  Yet another question for conservatives to ponder. 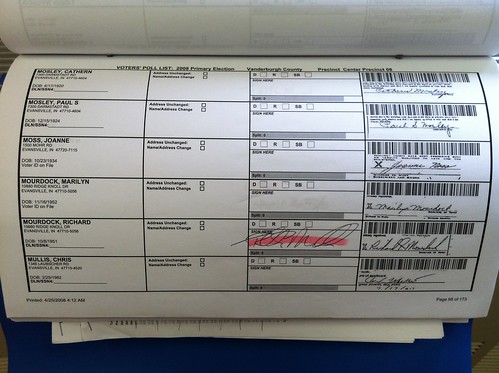 In Which Terry McAuliffe and Stacey Abrams Make the Case For... Glenn Youngkin
Sister Toldjah

So, That's Why Alec Baldwin Thought He Could Point a Prop Gun at People and Pull the Trigger
Townhall
Spot the FED! Glenn Greenwald highlights 'mysterious not-yet-indicted Ray Epps' who was caught on video inciting Capitol breach on Jan 6
Twitchy
A Big Electoral Shift Shows That Democrats Have Overplayed Their Hand Going Into 2022
Redstate
Ugly: He Urged Jan. 6 Protesters to Attack the Capitol, but Is This Instigator Really a 'Fed! Fed! Fed!'?
PJ Media