LLPH was excited to learn that our endorsed candidate, Frank Roche was featured in the widely read Conservative HQ website. This is great news and momentum for his campaign against RINO Rep. Renee Ellmers.

Visit Frank Roche’s website and help him out: http://frankrocheforcongress.com/

Read the article below: 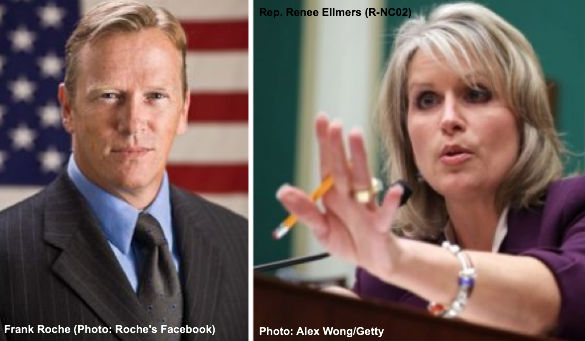 North Carolina Republican Rep. Renee Ellmers (NC-2) was one of the earliest disappointments of the 2010 Tea Party wave election. After being written-off by the GOP establishment, squeaking into office and having to beg for help from national Republicans to fund a recount to save her seat Ellmers, quickly joined the business-as-usual crowd that just months before had been hoping her Democratic opponent, New Democrat Coalition Congressman Bob Etheridge, would prevail.

Far from being a solid vote for conservative principles, out of the Tea Party wave class of 2010 Ellmers has proven to be one of the most reliable votes for the principle-free big government, big spending Capitol Hill establishment.

Her brief career in the House has been defined by talking a good game on a few issues, such as opposing Obamacare, while regularly surfacing to criticize conservatives for actually holding to their principles and fighting Obama’s agenda.

Nothing exemplifies why Renee Ellmers has got to go better than her hypocrisy on Obamacare.

In a “Bloggers Briefing” at the Heritage Foundation, Ellmers told an audience in March 2011 she would push GOP leadership to use a continuing-resolution bill to defund Obamacare.

Two years later, as our friend Jonathan Strong of National Review noted: “Ellmers took to Twitter today to bash conservative lobbying outfit Heritage Action and its strategy of trying to defund Obamacare with the next continuing resolution.

“Should we stop #Obamacare? YES! But @Heritage_Action’s strategy w/ Continuing Resolution is WRONG,” she said. Why, Ellmers asked, is Heritage Action spending $550,000 to attack “conservatives” and not using it to attack Democratic senator Kay Hagan, “who was the deciding vote on Obamacare?”

Then, the North Carolina Republican twisted the knife, as Strong put it, relaying a question about the group’s integrity. “‘Those groups only care about raising money, they want Reps back in the minority in the House’ – comment to me re: @Heritage_Action,” she said.

Now Renee Ellmers has come out in favor of the House Republican proposal for amnesty for illegal aliens.

It is worth noting that Ellmers has come out in favor of the amnesty proposal before it has even been made public saying, according to Neil Munro’s reporting for The Daily Caller that the federal government should allow illegal immigrants to stay in the United States, and should welcome a new inflow of foreign guest workers.

We have some free political advice for Renee Ellmers and other House Republicans who are prepared to buy the lie and support amnesty for illegal aliens – if you want to destroy the coalition that brought Republicans back to the majority in the House, and make the Republican Party not just a minority in the House, but irrelevant to national politics, go right ahead and pass an amnesty bill.

Roche reminds us of another economics professor turned political candidate – former Congressman and Senator Phil Gramm of Texas. Whip smart and a principled conservative Roche understands the tie between the declining quality of life and wages of America’s working families and the wave of illegal and legal immigration swamping this country and is prepared to fight for what makes America exceptional.

If you want a principled limited government constitutional conservative Republican, who shares the optimistic pro-growth ideas of Jack Kemp and Phil Gramm, then get in this primary and back conservative Frank Roche in the NC-2 Republican congressional primary.

To learn more about Frank Roche and how you can help him beat principle-free Republican Renee Ellmers click this link.

We need to get Frank Roche elected and sent to Congress in 2014. He is a true conservative who will have the backbone to stand up to the Washington Establishment!