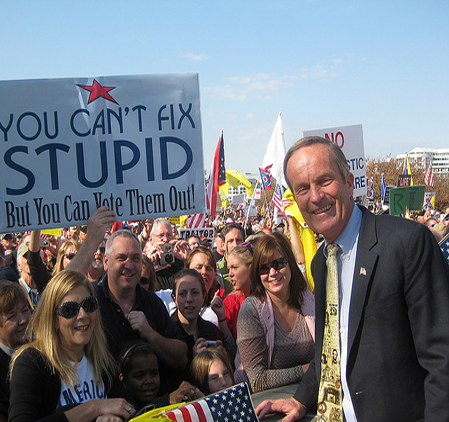 The first poll since Rep. Akin has been nominated as the GOP nominee to challenge Senator Claire McCaskill has been released by SurveyUSA.

He leads by 11 POINTS! And as evidence that this poll is not GOP tilted, Mitt Romney leads by a slimer margin over President Obama.

In the nationally watched race for U.S. Senator, which could help determine whether Republicans control the Senate, conservative Republican challenger Todd Akin is 11 points atop incumbent Democrat Claire McCaskill, 51% to 40%. Akin leads 7:1 among Tea party members. McCaskill holds 80% of the Democratic base, compared to Akin, who holds 91% of the Republican base. Independents favor the Republican by 16 points. Akin leads materially among the less educated; McCaskill ties Akin among college graduates. Akin leads among rich and poor voters. Akin, who is a U.S. Congressman from suburban St. Louis, manages to come within 5 points of McCaskill in the Democratic stronghold of greater St. Louis. Elsewhere in the state, the Republican leads. McCaskill has a 10-point advantage among the youngest voters, but Akin leads among voters age 35+.

The fact that Todd Akin is leading among independents, young voters, and the middle class should be worrisome to Senator McCaskill (D) who should be leading in these areas…but they know what she does not (at least she does not act like she knows it): President Obama and the Democrats’ plans are NOT WORKING!

Fellow Republicans at the Red Racing Horses says, “SUSA: Todd Akin (R) 51, Claire McCaskill (D-inc) 40. Unless there’s polling to the contrary soon, McCaskill appears well on her way to the title of “Blanche Lincoln of 2012.” She runs 4 points behind Obama, who is surprisingly only down by 1.”

I like the title given to Air Claire: “Blanche Lincoln of 2012”.  Help Todd Akin at: http://www.akin.org/  to make this a reality. Together, we can take our country back!