Gramps hooks up with Rosie the Riveter

Veterans Day…Memorial Day…it’s all the Same to me….

I never got a chance to say thank you to my Gramps…so….thanks Gramps……(he’s in the middle)….USS Lexington 1944, Japan Theater.

Stop….Look at their faces…..these dudes are Gods to me…we all can only try to be as worthy… 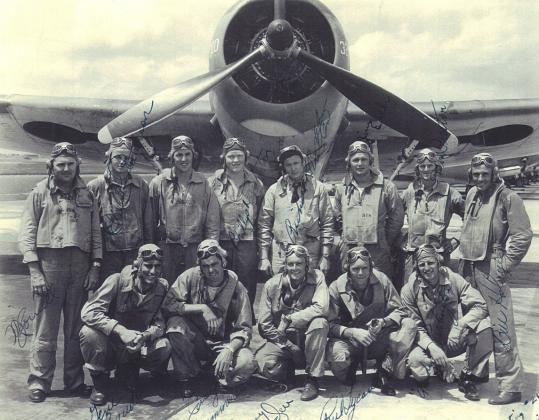 As its name suggests, the Avenger meted out severe retribution on the Japanese in the Pacific, participating in every major engagement through to VJ-Day. As a key weapon of war, the Avenger was so highly valued by the US Navy that its demand for the aircraft soon outstripped Grumman’s production capacity, so General Motors [GM] was contracted to build the near identical TBM from September 1942 onwards. Over 1000 Avengers also saw action with the Fleet Air Arm in both the Atlantic and the Pacific through to VJ-Day, and two squadrons of RNZAF TBDs fought alongside American Avengers on Bougainville in 1944.

While the Douglas Devastator had been “state of the art” when it was introduced in 1935, by 1939, the US Navy determined that it needed a more potent torpedo bomber, one with greater range, larger payload, faster speed, and tougher resistance to battle damage. The requirements for the new aircraft included: a top speed of 300 MPH, a (fully loaded) range of 1,000 miles, an internal weapons bay, 2000 lbs. payload, and a ceiling of 30,000 feet.

On the afternoon of December 7, 1941, Grumman held a ceremony to open its new Plant 2 in Bethpage and display the new torpedo bomber to the public.

During the program, Grumman vice president Clint Towl was called to the phone. “The Japs have bombed Pearl Harbor. We’re at war.” No announcement was made and the festivities continued. When the crowd filed out of the plant, they locked the gates, swept the plant for saboteurs, and went to a war footing, which they stayed on for almost four years.

Please remember…..you have No rights if your Dead…