Senator Rand Paul spent his Thursday doing some very important work: drawing attention to the fact that the House Republican leadership isn’t too keen on letting members in on the details of their ObamaCare replacement bill, let alone the public. I’ll let Rand speak for himself below: 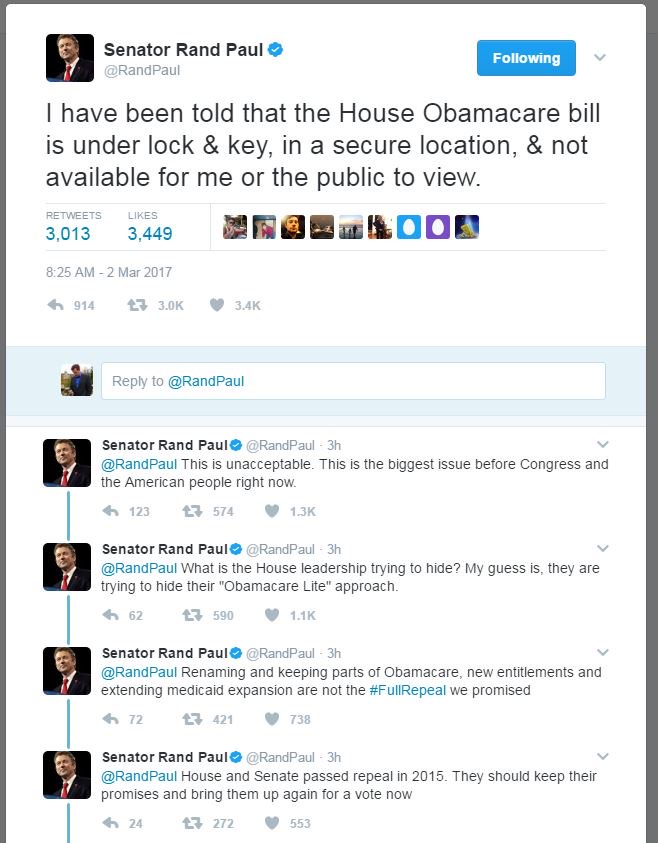 After awhile some Democrats got in on the act for their own reason, with that reason being an excuse for Republican-bashing. And while the bashing is well-deserved, the hypocrisy was not well-received.

Who of all people joined the call for healthcare bill transparency? Why, Nancy Pelosi of course.

Yes, the same Nancy Pelosi who said of ObamaCare that “we have to pass the bill so you can find out what is in it, away from the fog of the controversy. ” (You can click on her Tweet to see how that went over.)

We all know how well that worked out with ObamaCare. It passed, and we found out that is sucks.

It is important that we join Rand Paul in making sure the Republicans don’t ram through their own “ObamaCare-lite” bill without transparency and in violation of their campaign promises to fully repeal and replace. Otherwise, they will be hypocrites of the same low grade that Pelosi and her cohorts are.