I Should Not Have Had to Go to Texas

I first heard Ted Cruz speak in Atlanta at the first RedState Gathering. As much as Marco Rubio or Nikki Haley, Cruz was impressive even then. I casually monitored his campaign for Attorney General and then Senator, marveling at his consistent ability to defend and articulate conservative ideas. America needs Mr. Cruz in the Senate, and the only question for me was how much of my time I could devote to getting him there.

Oh, I was going to Texas anyway, for the  FreePAC event put on by FreedomWorks  in association with Glenn Beck’s Restoring Love.  But I decided to spend the last ten days before the July 31st  Republican US Senate runoff volunteering with the  Ted Cruz campaign. 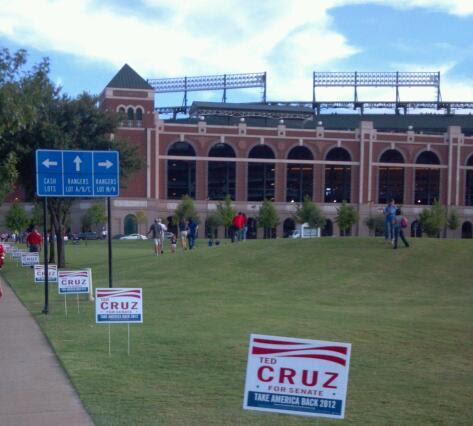 Cruz would have won without my help. But the campaign should not have needed volunteer help to get out the vote (GOTV) at all.  Cruz should have had an entire political party getting out the vote for him.

“But wait”, you say, “this was a primary, a highly contested runoff even, and the Party should not get involved at that stage.”

The Party should do the GOTV at every stage, allowing candidates to focus on delivering their message.

In the process, the Party would:

Doing GOTV in the Party is contrary to current trends, however. Over the last few decades, candidates themselves have taken on that role.  They each have to hire staff, buy voter lists, attract volunteers and precinct captains — essentially, a campaign is a temporary version of a political party. Typically, all of the voter preference information gathered by candidates is lost after the election.

Now increasingly outside groups of tea party activists and volunteers associated with SuperPACs do the work of the political parties, even supplanting candidates. It’s a giant mess, as multiple organizations often barred legally from coordinating with one another contact the same voters with the same message.

The standard best-practice for  GOTV involves slicing and dicing the electorate into demographic pieces and designing a message and policy combination that appeals to the groups the campaign wants to target. Potential voters are micro-targeted based on demography, voting records, economic data, and any other information that can be acquired.  The result goes into phone banking, walk lists, and advertising decisions.

As a conservative I find that strategy unappealing.

The typical strategy is unappealing because it relies on the statistical tendencies of groups to predict individual behavior. Further, tailoring policies and messaging to attract particular voting groups is often simply pandering, the results of which we can see writ large in expansion of entitlement programs and such things as artificial increases in the rate of home ownership.

Inherent in the strategy is emphasis on a given election or political race, sacrificing other races up and down the ballot, now and in the future.

As an activist I find all of that to be weak in several areas and ultimately ineffective. That ineffectiveness showed itself in 2010:

Let’s face it; the left has been drubbing us in the race to harness technology for GOTV.  The entire Google establishment is married to the Obama machine.  In fact, they have been outgunning us in GOTV in general.  We crushed the Democrats in the war of ideas and the political narrative in 2010, yet we dramatically underperformed our historic potential for success due to a lopsided GOTV disadvantage.  We underperformed our polling numbers in key states because of the superior ground game of the leftist union machine.  We will never fully succeed if we only seek superior ideas and passion, especially when we are already at a disadvantage in terms of time, treasure, and talent.

The alternative requires noting that conservatives are much more spread out than are liberals. Liberals tend to live in pockets: urban areas, college towns,  mental hospitals, and cemeteries. They tend also toward activism in a way conservatives haven’t in the past. What we need is a way to reach a small number of people in the places where they live. What we need is the  Neighborhood Precinct Committeeman Strategy.

You vote in a precinct. Sometimes several precincts all vote in the same polling place, but most of the time a precinct has a unique polling place. There are usually about 1000 voters per precinct.

Every precinct is supposed to have a person (or several) from that precinct to represent each political party to that precinct — and to represent that precinct to the party. The Precinct Committeeman (or Precinct Chair as they are called in, e.g., Texas) is responsible for finding election judges, vetting candidates, voting on Party officers, and most importantly, getting out the vote in his precinct.

Nationwide, roughly half of all precincts slots in the Republican Party are empty. If voters are going to be encouraged to vote, campaigns have no choice but to do it.

It need not be that way.  The awakening of Constitutional conservatives in the tea party and liberty movement provides a great chance to fill out those slots in the Republican Party (and then the other parties) and turn the party into the massive GOTV machine it’s supposed to be. In the process, the new PCs will have influence over who becomes a candidate, keeping out those who are in it for power, money, or fame, and attracting those who are motivated by service to conservative ideals.

There is no sure thing, of course, and power corrupts. But with explicitly Constitutional conservative activists contacting every voter in every precinct, we have a chance to sway not just the political direction of the country, but the very culture of our society.

The only way any of that is possible is if the party has in each precinct one or more people who live in the precinct and are responsible for GOTV there. Living in the precinct means building a relationship with the voters there. It’s the ultimate in micro-targeting: the PC knows what issues are important to each voter, and is able to contact them when they are doing the things that form their opinions. Whether it’s accompanying them to the shooting range or pointing out inflationary policies at the grocery store, the PC is able to turn public opinion as it should be turned — by living his life as a conservative.

Systematic door-knocking is also a lot easier to plan for the precinct in which the block-walkers live.

Follow my advice, GOP, and be zealous and jealous of your role in GOTV. If trends continue, and outside groups continue to have the financial support and volunteer energy to run campaigns without you, there will be no need for you at all.

A Group Of Parents Sent Their Kids' Face Masks to A Lab for Analysis. Here's What They Found
Townhall
Patriarchal, sexist Victoria's Secret replacing the Angels with soccer star Megan Rapinoe and the rest of the 'VS Collective'
Twitchy
Joe Manchin Phone Call Leaks and It Has Massive Implications
Redstate
Texans Are Getting Blackout Warnings in June. Why?
PJ Media