This is a story about a fence.  Well, not just one fence, but millions of them.  What you believe about them and how they make you feel says about your politics all I need to know.

Picture if you will an idle street in any American city, suburb, or small town.  Kids play about.  A car passes a bit too fast, draws the glances of adults tending their yards, and slows down. A church bell tolls on Sunday morning.

Surrounding many of the houses on this quiet little street are short fences, serving to keep small children and smaller dogs from wandering off — white picket fences, some not even fully enclosing the property they protect. 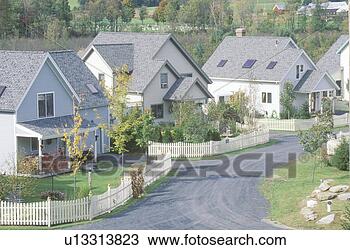 But they mark the line between one home and the next, between public and private.  In a functioning civil society, they stand as an impenetrable wall defending the estate held within, and inside of which the authority of the State does not extend.  Without a functioning civil society, they are of no use whatever. If people will not govern themselves and honor the delineation of property bounds, no fence is strong enough.

Yet when surrounded by outlaws, the house without a fence will be plundered, its owners driven off.

Between homes, these perfunctory lines allow neighbors to cooperate for purposes of maintenance to their respective properties. More, they allow neighbors to know where they stand and whose authority holds sway there. They are borders.

The white picket fence is also a symbol separating left from right. A normal person sees the idyllic scene described above as an ideal, a thing worth pursuing and protecting. A person trained to see life through the prism of leftist power theoptics has a wholly different reaction.

A fence is anathema to those steeped in the beneficial goodness of compulsory sharing.  To demarcate property lines is to perpetuate the sanctity of property rights, which is an obstactle the leftist must overcome.

To the leftist, the white picket fence is perversely a symbol of all that is wrong with the world. For it is a short journey, long past travelled, from knowing that not every pretty little suburban house contains a perfect little suburban family to believing that if the outside is pretty the inside must be something awful, and further, that a beautiful image is to be avoided for that reason.

And more specifically the fence is a symbol of consumption, a means of strawmanning the American Dream.  The dream, in leftist myth, is to obtain by hook or crook “2.5 kids, a house, and a white picket fence”.  Since the desire for stuff leads some people to abuse others to obtain it, the stuff itself (and the evil corporatist marketing machine that feeds the desire for it, as the story goes) must be to blame.

But there is nothing wrong with a fence.  And indeed, the American Dream is that here, the sky is the limit.  There is no need to stop with a suburban picket fence, or a need to own property at all.  And you get to decide how many kids is enough, be it none or nine. The American Dream is the liberty to determine one’s own future in every regard.

So you can be sure that Barack Obama, who has swum for a lifetime in the foul sea of power analysis, hates the very idea of a white picket fence, and fences in general, except those separating him from his subjects. In closing, I ask you to consider the attitude of the left in general and the Communist in Chief in particular toward this:

Cross-posted at The Minority Report.

Will Georgia Remain a Swing State? Biden's Stance on Manufacturing Could Play a Part
Joe Cunningham

BREAKING: President Trump Has Announced More Than 140 Additional Pardons and Clemencies
Townhall
Cuomo to DC: Give me $15 billion or I shoot what’s left of my tax base
HotAir
Lincoln Project co-founder tells woman to 'go to hell and wash your mouth out with soap' after he loses ill-advised war of words
Twitchy
Wow, Politico Is No Longer Covering Up Biden's Cognitive Decline
PJ Media