Toward a new Separation

I had a thought, a fine Emersonian ear worm that clogged up the rest of my day.  Sometimes when I have such a thought, it won’t go away to make space for other, more fruitful ones unless I post about it.

We all know about the separation of Church and State (which our leftist readers may feel free to read in all caps). We recall that it grew out of the First Amendment’s caution that “Congress shall make no law respecting the establishment of a State religion, nor prohibiting the free exercise thereof”. But it has grown into a wholly different animal, as this or that group sues this or that local government over how many angels can dance on the steps of a courthouse.

But the separation has at least some value, in keeping government out of church affairs. Government increasingly does the work the Church ought to be doing, but whether and how the one relates to the other I don’t know.  This post is not about that.

In the course of the last year, we’ve seen the huge Toxic Asset Relief Program (TARP) pushed through Congress and signed by a Republican President; a bailout and all-too-predictable subsequent bankruptcy for two iconic American car makers, after which the government ended up owning one of them.  The Federal government has ineffectually tried to stimulate the overall economy by borrowing (or wishing into existence) trillions of dollars and spending it on road signs, or by buying perfectly good assets and destroying them. 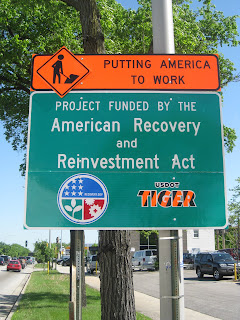 We’ve seen the union thugs intimidate and beat up those with whom they disagree, because of their alliance with the government.

Indeed, the history of labor unions such as the NEA, SEIU, and others shows that union leadership inevitably becomes more leftist and prone to both policies and tactics that its broader membership would otherwise never consider.

And all the while, our media has with a few exceptions led the cheering.

So I propose a new set of Walls of Separation.

Now, I know none of this would ever come to pass.   To each point there are free speech and other Constitutional counterpoints.  But once I thought of this series of separations, I had to post about it.