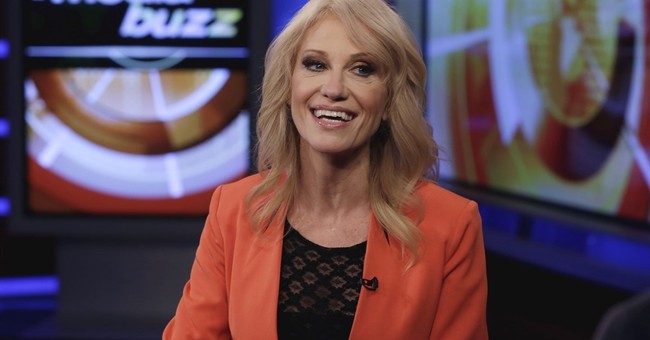 This isn’t all that easy for me to admit — it’s both counter-intuitive and undeniably unpopular in a number of circles — but an article I read this morning is prompting me to bare my soul: I actually kind of like Kellyanne Conway.  Red State’s own Jay Caruso drew my attention to this piece by The Atlantic’s Molly Ball. It’s a lengthy and, in my view, interesting read on the Counselor to the President.  And while it may not be entirely “snarky and condescending,” as one Twitter friend characterized it, it’s certainly no hagiography.  Still, my reaction upon reading it was essentially the same one I have to most things I read, see or hear about Kellyanne:  Can’t help it – I like her. *shrug*

Of course, after I retweeted Jay, I received the obligatory criticism from both Trump fans and detractors. One took a swipe at Red State, insinuating that citing The Atlantic signaled Red State’s downward trajectory. When I responded that it might be worthwhile to read the piece and pointed out that I actually like Kellyanne, another made a point to let me know why “we” (not sure if she had a mouse in her pocket or was speaking on behalf of an identifiable group) don’t – “she sold her soul.”  Well, that may well be. I’ve no special insight into its present ownership. I certainly can understand taking issue with her job choice. It’s no secret I’m not a fan of her boss.  But whatever my thoughts on him, I really can’t argue with her success in getting him elected. I was one of the first to declare there was NO WAY. Clearly, I was wrong. As Molly Ball’s article points out, Kellyanne saw an angle many of us didn’t. And she found a way to help achieve the unthinkable.

That doesn’t really explain why I like her, I realize. It’s probably a better argument for why I oughtn’t. I pondered my protective instinct regarding her a bit on a recent “Q with a View” episode.  (That’s my radio/podcasting gig.)  Maybe it just comes down to relatability. We’re close in age, lawyers, mothers, blonde. (Okay, that last one’s quite superficial, but true, nonetheless.)  Then there’s the whole fashion-challenged thing, which I alluded to here.  The truth of the matter is, were I ever to be asked, “Who are you wearing?” (which is a really weird and somewhat creepy thing to ask, when you think about it), I’d have to answer, “Kohl’s.”  Maybe “Ann Taylor Loft” or “Macy’s” on a good day….

The bottom line is that Kellyanne just does Kellyanne and is seemingly unapologetic about that. (Shut up with the Trump comparisons – he’s often a boorish bully; she’s not.)  Who knows what her inner dialogue sounds like? It might be amusing. It might be downright pathetic.  From where I sit, she’s sanguine and sunny and I admire her gumption. Even when she does and says things which strain credulity.

So there you have it – my awkward confession:  I kind of like Kellyanne Conway.  Let the shaming commence.

Trump Responds to the Purging of Liz Cheney
Townhall
Andrew Yang's foolish attempt at damage control after unequivocally supporting Israel's right to self-defense only pisses off the Outrage Mob even more
Twitchy
We Don't Have a President
Redstate
The Morning Briefing: Everything Is Fine—Biden Naps While World Falls Apart
PJ Media