I was all excited to finally get my RS Diary up and running, and then….I couldn’t think of anything to say. I developed writer’s block of the worst sort.  And I couldn’t just push past it because I wanted to be sure my first actual diary entry here was decent and arguably meaningful.  Well, others may ultimately not deem it so, but this topic caught my attention today and nudged me to get off my duff and say something.

There’s been a rise in anti-Semitic threats on Jewish Community Centers.  As CNN reports, there were eleven bomb threats yesterday alone.   And it doesn’t extend just to houses of worship and religious centers.  Locally, we heard the distressing news of up to 200 headstones being toppled in a Jewish cemetery over the weekend.  The vandalism is being investigated and hopefully, the culprits will be identified.  This comes just a month after a local JCC was evacuated due to a bomb threat and two months after a disturbing incident at a local high school involving anti-Semitic Instagram posts.

The President has rightly come under fire for his seeming tone-deafness in response to queries regarding the recent uptick in anti-Semitic threats and sentiment.  (Yes, Donald, we know you got 306 Electoral votes.  That’s very nice.  Now, about that anti-Semitism….) Finally, the White House issued the following statement:  “Hatred and hate-motivated violence of any kind have no place in a country founded on the promise of individual freedom. The President has made it abundantly clear that these actions are unacceptable,” said White House deputy press secretary Lindsay Walters.

America is a nation built on the principle of religious tolerance. We must protect our houses of worship & religious centers. #JCC

Well, I may not be a fan of her father, or of his approach to the issue, but I’m with her. I’ve zero patience for this, and it isn’t simply because I have several close family members who are Jewish, though that certainly brings it closer to home.  Ivanka is right – we must protect our houses of worship and religious centers.  Be they churches, mosques, or temples, they are central to the freedoms we hold dear.  And attacks on them are attacks on those same freedoms. 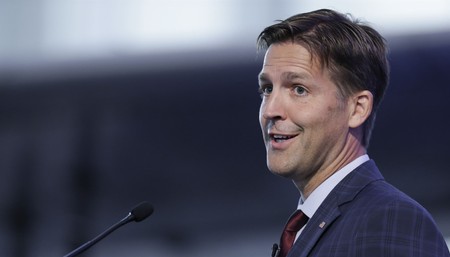 Trump Makes a Final Move Against China, and It's a Big One
Bonchie

What AG Barr Told Trump about the 'Stolen' Election Claims Before He Resigned
Townhall
Hoo boy: Pence not attending Trump send-off tomorrow morning
HotAir
'I learned it by watching you!' Babylon Bee's hilariously honest PSA for rioters wins Twitter AND the Internet (watch)
Twitchy
Biden Cannot Legally Get Us Back Into the Paris Climate Accords; Here's Why
PJ Media