I'm Sorry For The USNS Comfort...And For Mount Suribachi 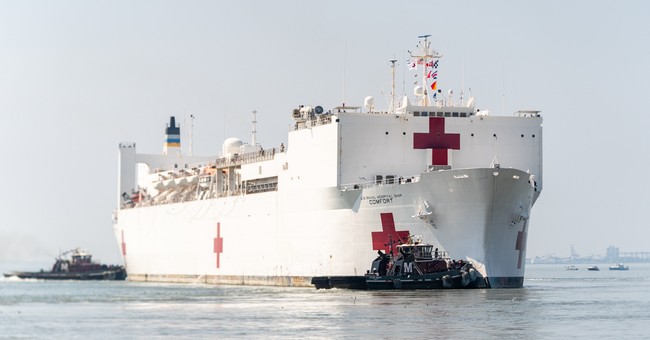 Glenn Reynolds of Instapundit is right.  Sending the USNS Comfort to New York City caused New Yorkers to engage in “Defeating the Purpose.”

Too many New Yorkers came to watch the Navy hospital ship enter the harbor.  You know, the one that Rachel Maddow, the dean of MSNBC, said wouldn’t show up for weeks.  The one that will offer beds and world-class medical care for a city in the grips of a killing pandemic.  The one that led CNBC to run this headline: “Iconic photos of the USNS Comfort arriving in New York, providing a glimmer of hope.”.

(Can you IMAGINE how much trouble the CNBCers who wrote that headline will be in?  I’ll bet that, tomorrow, in the middle of Rockerfeller Center, they’ll be standing there like Gedde Watanabe in “Gung Ho,” screaming and begging forgiveness for their crimes from the MSNBC staffers surrounding them).

But, what matters now is not hope, but prudence.  Not inspiration, but social distancing! The New Yorkers who flocked to the harbor shores, some waving American flags, should have kept their six-foot distance.  And, better yet, stayed indoors.  With their fears to comfort them, instead of the sight of a Navy ship coming to their rescue.

Better yet yet, the Comfort should have entered the harbor at night.  And docked at some out-of-the-way pier.  With its lights dimmed.  We could even have covered up the red crosses.  After all, we don’t want to alarm anyone, do we?

And, come to think of it…we overreacted at Mount Suribachi.  (You know…at Iwo Jima).  Raising the flag on the mountain, in the middle of the battle, was admittedly a bit over the top.  A bit overstated.  And, let’s be honest here, unnecessary.  The Marines had already been briefed, before the landing, on how important the operation was.  Did they really need any additional inspiration at the moment?  The Navy could simply have issued a press release, announcing that the mountaintop had been secured.

And, while we’re at it, remember when the Americans captured Baghdad in 2003?  A Marine climbed a statue of Saddam Hussein and draped the Stars and Stripes over his face.  In front of the international news media! The Pentagon chastised that Marine, for sending the wrong message to the international community.  Hussein was NOT toppled by a pack of jingoistic Americans.  No, he was felled by a multinational force, comprised of mature, cosmopolitan fighters imbued with political correctness…sorry, a robust understanding of the importance of taking into account all the feelings and concerns of the international community. So pay no attention, Agence France Presse, to that rube on the statue. Surely, he simply misplaced the UN flag he carried in his cargo pocket.

I look at the spectacle of the USNS Comfort, showily sailing into NYC harbor, surrounding by cheering New Yorkers, and I weep.  Did we learn nothing from those show-off Marines at Baghdad, or atop Mount Suribachi?