At first, there was the usual tough-talking rhetoric from the Donald on immigration.

“These are temporary foreign workers, imported from abroad, for the explicit purpose of substituting for American workers at lower pay. I remain totally committed to eliminating rampant, widespread H-1B abuse,” Trump said in a statement on his website.  The argument can be made that this issue put Trump in the spotlight and was the major reason for his front-runner status and rise in popularity.

Then later on, came the epiphany on the debate stage during the Fox News debate on March 3rd in Detroit when asked this by Megan Kelly:

Mr. Trump, your campaign website to this day argues that more visas for highly skilled workers would, quote, “decimate American workers”. However, at the CNBC debate, you spoke enthusiastically in favor of these visas. So, which is it?

TRUMP: I’m changing. I’m changing. We need highly skilled people in this country, and if we can’t do it, we’ll get them in. But, and we do need in Silicon Valley, we absolutely have to have.

We already know Trump hired illegals to help build Trump Towers, and has hired illegals to work for him in Florida.  Now comes another abuse of foreign labor thru his little-known modeling agency which still exists. Foreign workers are normally paid the amount that is stated on their immigration paperwork, in this case the H1-B visa.  The employer (in this case Trump Model Management) is ultimately responsible for paying the worker this amount.

A class action lawsuit has been filed by Alexia Palmer, a Jamaican model brought to this country thru the H1-B Visa program.  Palmer contends she was promised over $200,000 in salaries over a three-year period, or approximately $75,000 per year when in effect she actually received only on average $10,000 a year.  The amount she received is in direct conflict in a statement from the Trump Model Management president.

“Ms. Palmer will receive compensation of at least $75,000 per year,” (Trump Model Management) president Corinne Nicolas said in a letter to immigration officials. “She is a model whose services have been in great demand, and whose proposed temporary presence in the United States has stirred great anticipation by Trump Model Management and its clientele.”A copy of Palmer’s visa appears below….. 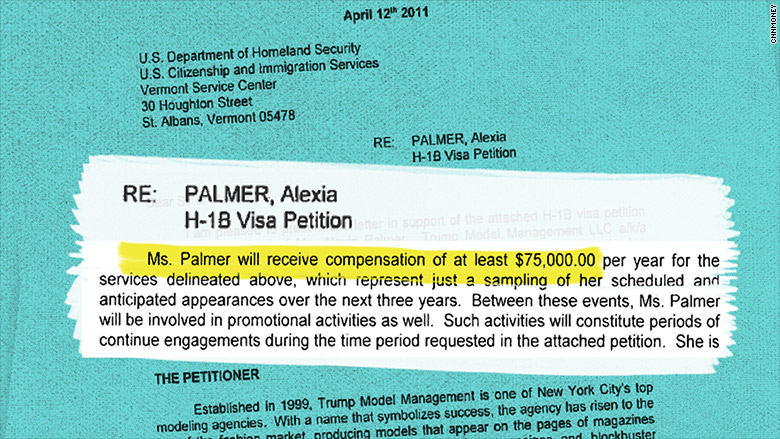 Overall, Trump Model Management brought to the U.S over 30 models from different countries. In addition to Jamaica, models came from Brazil, Latvia, and China.  Over half the visas stated $75,000 as salary, yet apparently few received close to that amount.

Of course there is disagreement between immigration experts and Trump attorneys as to whether models such as Palmer are being exploited or treated fairly. “It seems pretty clear to me that there was a violation… and a pretty egregious violation,” said New York immigration attorney Jeffrey Feinbloom.  The U.S. Citizenship and Immigration Services agency (USCIS) states companies “must pay the actual wage or the prevailing wage, whichever is higher. Employers may never pay below the prevailing wage.” The prevailing wage is currently $45,000.

Neil Ruiz, executive director of the Center for Law, Economics and Finance at George Washington University and a national expert on H-1B visas stated “If someone isn’t being paid what they are supposed to be paid, they are being exploited.  This case shows that [Trump’s] own company has benefited from exploiting his own H-1B visa holders.”

But Trump attorneys state what Palmer and the other models received in pay were clearly outlined in the agreements and contracts they signed. Trump attorney Lawrence Rosen stated “It is important to note that at no time while TMM was her model manager did Ms. Palmer EVER object to any of these deductions from her gross pay.”

This scandal, similar to Trump University, will likely linger and leave a stench through the remainder of the Trump campaign.

A final note:  Melania Trump, the current and third wife of Donald Trump, came to this country on an H1-B visa thru Trump Model Management.   National Review columnist Kevin Williamson had this to say regarding Melania Trump:  Being married to Donald Trump is, as it turns out, another temporary job Americans just won’t do.