The media failed to cover an important development that took place in the House of Representatives on Thursday.

From the Washington Examiner:

With House Speaker Boehner confirming yesterday that he will stay on until his successor can confirm 218 votes, the motion to remove him could be “brought at any time.

“McCarthy just dropped out of the race. But rather than have the vote today, Boehner cancelled the election, so he has time to pick another candidate,” Massie wrote in a Facebook post Thursday. “This is what’s wrong with Washington, D.C. Power structure laid bare.”

“We had two candidates running today, and then the election was abruptly brought to an end,” said Rep. Dave Brat, R-Va., a member of the House Freedom Caucus. “That’s interesting in and of itself. The news hasn’t covered that … Why didn’t the two other candidates get to have a vote today?”

According to House rules, any member can offer a motion to vacate the speaker’s chair and force a de facto ‘vote of no confidence’ in the Speaker.  Under normal circumstances, an individual member has no power to force a vote on any bill or resolution, but the motion to vacate is “privileged.”  There is nothing Boehner can do to block the motion.
Brat challenged the notion that there are not enough conservative caucus votes available to elect a new speaker such as [mc_name name=’Rep. Daniel Webster (R-FL)’ chamber=’house’ mcid=’W000806′ ], R-Fla.  “There are stories out there in the media about 30 or 40 of us who are challenging the Republican conference. That’s a false narrative,” Brat said. “Just last week, you can see the true numbers, 153 Republicans voted against the continuing resolution. That’s the true number.” 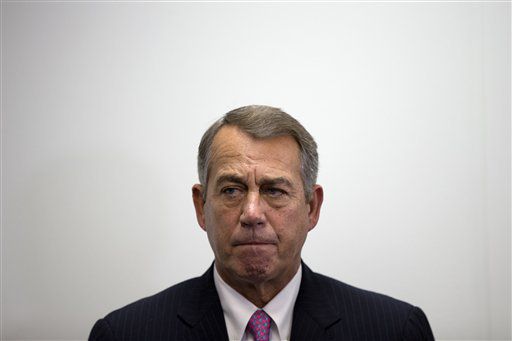 Boehner has pledged to stay on until a new speaker is elected (translation: until an acceptable establishment candidate is in place.)  Boehner simply cannot be trusted and is too corrupt to allow Webster or any conservative caucus nominee to elected.  If the conservatives arrive at a consensus candidate to rally around, and truly want their candidate elected, they have no choice but to remove Boehner from the equation immediately.
Share
Tweet
Trending on Redstate Video
Trending