If you’re becoming nauseous or you’re staying up late worrying about the inevitability of a Donald Trump nomination, you can start to rest easy.  On the other hand, if you’re giddy and elated over the possibility of Donald Trump becoming the GOP nominee, you may want to temper your enthusiasm.

Larry Sabato’s Crystal Ball analysis from August 13th sheds some light and some reality on the potential Donald Trump coronation.

Trump is apparently so unique to the Presidential race that the Center for Politics created a special category or designation just for him.  From the Center’s Crystal Ball:

Donald Trump is so special that we’ve created a category (and perhaps a word) just for him in our Republican presidential rankings: “The Un-Nominatable Frontrunner.”

Trump’s tier has partial precedents. Remember when then-Rep. Michele Bachmann (MN), businessman Herman Cain, and former Speaker of the House Newt Gingrich led national and/or early state polls at various times in the 2012 cycle? There was no way that any of the trio was going to end up as the Republican nominee for president. You could say the same about former New York City Mayor Rudy Giuliani in the early stages of the 2008 election.

Friends, this is also true today for The Donald. Or perhaps we should say: If Trump is nominated, then everything we think we know about presidential nominations is wrong.

Also, as shown below, the true attention span of the voters is never on full display for presidential campaigns in the early stages.  As Sabato reminds us, (if history is any indication) very few people are paying attention to politics right now. 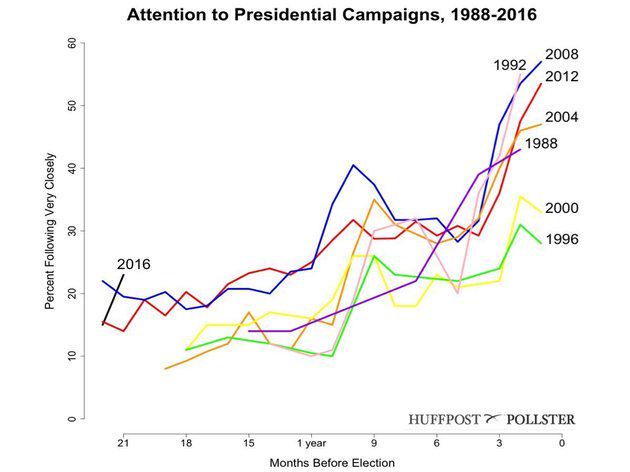 The final conclusion:  No question Trump is the current frontrunner.  Will he become the Republican nominee for President?  Highly unlikely…..