Oh what a tangled web we weave,
When first we practise to deceive.
~ Sir Walter Scott

As 24thstate.com’s Jim Durbin points out, Reverend Elston McCowan is having some consistency issues with his version of the events on the night of Congressman Carnahan’s health care town hall.  His original story of that night’s events come from a St. Louis Post-Dispatch article published on August 8th.

But Elston McCowan, an SEIU staffer, said Gladney was actually an instigator. McCowan accused Gladney of attacking him as he walked to his car. McCowan said he suffered a dislocated shoulder.

After much backlash (and probably a lot of coaching from the SEIU), McCowan is changing his story.  His new version of events appears in, wait for it, Links: The International Journal of Socialist Renewal.

Walking outside, McCowan saw Gladney selling buttons of Obama in blackface and Obama smoking weed. Feeling insulted, McCowan asked why a black man would be hawking material denigrating the first black president as he pointed to one of the buttons.

“When I pointed at the button, Gladney slapped my hand. So I told him not to hit me and pointed at it again and repeated my question. He smacked my hand even harder, hit me several times and pushed me down. As I went down, I grabbed him by reflex to break my fall. I hit my shoulder and something popped. I lost consciousness for a moment but soon realised that Gladney continued to hit me.

“Another SEIU guy, Perry Molens, came over and told Gladney, ‘He’s a minister and won’t fight back. He can’t see out of one eye. Stop hitting him!’. When Gladney kept on, Perry tried to get him off of me and threw a punch in the process.

“I don’t know why Gladney had an attorney on hand, but his attorney came over yelling ‘You two attacked him!’. Gladney went off to find cops and told them to arrest us. The cops wouldn’t listen to us and did what the Tea Party people told them to do. They arrested me, Perry, a newspaper reporter and three supporters of healthcare reform.”

This is a decidedly different story.  No longer is McCowan claiming that Gladney attacked him out of nowhere.  He now says that the dispute was over buttons of Obama in blackface and smoking pot.  It is a seemingly small change in the story, but if McCowan is willing to lie about how this we know he is certainly willing to lie about who the instigator was.

Here’s the other problem: No one can prove that these buttons exist.  Here are the six buttons that Gladney attorney David Brown says Gladney was selling (via same 24thstate.com posting)

Not one of those even has Obama pictured in it.

Jim put out a challenge: Find a picture of the buttons that McCowan was supposedly questioning.  A blogger by the name of Adam at St. Louis Activist Blog claimed to find the conclusive evidence.  He’s got a screen cap of a button with Obama in it that was on the board of another one of the button sellers (apparently another black conservative who was selling buttons for Gladney attorney David Brown The owner of this board is David Brown himself.  He runs a business on the side selling merchandise at political events.  He sold some of his buttons to Gladney.). 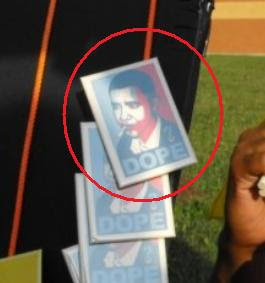 This is Adam’s conclusive evidence that a button of Obama smoking weed existed.  The problem is that the picture shows nothing of the sort.  In fact, I’m betting that most people here on RedState have probably seen the source image for this button several times.

Now, I will grant that I am one of the biggest squares around.  Even I can tell that this is not a picture of Barack Obama smoking pot.  It’s just your average, every day cancer stick (AKA tobacco cigarette).  I guess I could give a certain amount of leeway given the replacing of the word HOPE with DOPE why one would make this mistake considering that you really can’t see the difference on a low-resolution image taken from a YouTube video.  You would think that someone would make sure their evidence was air tight before going to print with it. {Oh, and Andy.  I’ve got a screen cap of your post.  Don’t try to send it down the memory hole.}

While it is true that Andy has shown that more than six buttons were for sale, there is still no evidence to support McCowan’s assertion.  He has already told two different versions of what happened that night.  How many more does he have to tell before he finally admits the truth?

Then again, McCowan isn’t the only one lying from that night.

Note: Corrected information comes from a follow-up post by Jim on 24thstate.com.

Cross-posted at my personal blog.