Obama Gives Us A Sign As To How He Will Govern 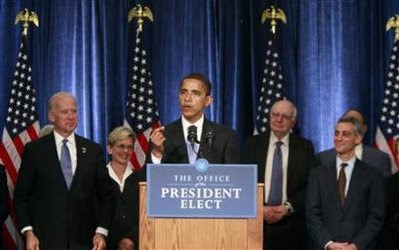 Anyone see this image posted front and center on Drudge? It is from Senator Obama’s press conference Friday, and it has something new. No, not that. Rather, the sign on the podium- it says, “The Office of the President Elect”. Hmm.

So I am forced to ask- when/where/what/how was this created? As a history buff, I am quite curious to find out the answer, as sometimes the creation of new governmental offices reflects historic events in the country. Of course, Sen. Obama’s election itself is historic, but as he is the not the first person in this bigger-picture position, I do not see the necessity of having created this office.

Did you notice- the office already has an Official Seal as well, meaning it must be real.

My Point: Hubris much?

Seriously, I do not remember President Bush or President Clinton having any such signs between December and January, and I am too young to remember beyond that. If anyone really does remember or has images, articles, etc. about such things with past Presidents, I really would like to hear/see about them; please post a comment if you have such evidence one way or the other.

By the way, did you notice that when asked “Will you stick to your plan to raise taxes on those who earn more than $250,000 per year?” that he did not answer one way or the other?

(All appropriate credit for the “sign” joke to the movie “My Date with Drew”.)

'Death to Amerika': Is This Tehran or Is This Antifa?
Nick Arama

Eric Holder Charging Oregon Taxpayers $2,300 Per Hour for Advice About Racist Graffiti on a Locker at its Medical School
Shipwreckedcrew

Who Killed Ashli Babbitt
Townhall
Apparently 'what Joe Biden says does not represent the official position of the Biden admin'
Twitchy
'Solid Approval Ratings' Really? Nonsense, Here's Why Americans Have Had Enough of Biden
Redstate
New Study Shows Just How in the Tank for Biden the Legacy Media Is
PJ Media