Abe Lincoln on Why We Must Fight For This Election 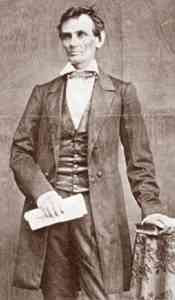 Over at the Weekly Standard, Bill Kristol writes:

“If Obama wins, we wish him well. But for now, we can only echo the words of the 30-year-old Abraham Lincoln. On December 26, 1839, responding to the confident prediction of one of his political opponents “that every State in the Union will vote for Mr. Van Buren at the next Presidential election” and that Lincoln’s opposition to the Van Buren forces was therefore bound to be in vain, Lincoln responded:

Address that argument to cowards and to knaves; with the free and the brave it will effect nothing. It may be true; if it must, let it… The probability that we may fall in the struggle ought not to deter us from the support of a cause we believe to be just… Let none falter, who thinks he is right, and we may succeed. But if after all, we shall fail, be it so.

As it happens, the Whig ticket Lincoln supported won that 1840 election. So might, against the odds, the party of Lincoln win this year.”

Of course, both William Henry Harrison, who won that 1840 election, died in office, and so did Lincoln. But do not fret! For I have more words from Lincoln to rally the conservative cause, these from his speech at Cooper Union in New York (emphasis mine):

“[Senator Douglas said,] ‘Our fathers, when they framed the Government under which we live, understood this question just as well, and even better, than we do now.’

I fully indorse this, and I adopt it as a text for this discourse. I so adopt it because it furnishes a precise and an agreed starting point for a discussion between Republicans and that wing of the Democracy headed by Senator Douglas. It simply leaves the inquiry: ‘What was the understanding those fathers had of the question mentioned?’

What is the frame of government under which we live?

The answer must be: ‘The Constitution of the United States.’ That Constitution consists of the original, framed in 1787, and under which the present government first went into operation, and [] subsequently framed amendments.“

My Point: We are still under the same present government; Conservatives believe in the importance of this, while Liberals do not understand the significance of the threats that they cause to it. Now let’s go out and vote and fight for what’s Right!