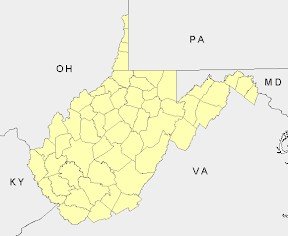 With the Russian-Georgian conflict erupting over South Ossetia, I figure it’s a good time to recall the history of the Union-Confederate conflict over West Virginia. No, the situations are not really close to the same in terms of centuries of ethnic issues or international politics, but some of the themes are very concurrent. Both situations deal with a population split between affinities to their old large dominating powers and the hopes of sticking with newfound independence, and both “separations” are very legally questionable.

Ever since the Shenandoah and areas west of it became settled, the citizens of what is now West Virginia had tried to gain better representation. In 1829, a Constitutional Convention was called for in Virginia, where westerners’ main goals included much greater representation in the state assembly. But, they did not get quite what they wanted, and although the new Constitution was popularly approved state-wide, most westerners voted against it. Over time, the areas of the Blue Ridge Mountains and the Ohio River Valley near Wheeling became more and more populous. Since the mountains physically separated these areas from the eastern parts of the state, there was a high Northern influence and a low Southern one; support of abolition rose, as did adherence to other Northern sectional politics.

Then, Virginia’s secession from the United States in May of 1861 prompted what was known as the Wheeling Conventions. At the Second Convention, this one coming after Virginia formally seceded, representatives from the western areas agreed to having a popular vote in the area over whether to form a new state; the vote overwhelmingly passed, amidst a) suspicion that Union soldiers participated illegally, and b) knowledge that many counties did not register any votes because they originally sided with Virginia’s secession from the U.S. But, before sending an application for admission to the Union, the representatives called upon the federal government to recognize them as the official government of old Virginia, so that a new West Virginia could be created pursuant to the Constitutional restrictions on carving new state boundaries from old ones. Such federal recognition gave the Convention grounds to include more counties than were represented originally, including those that did not register votes in the new state creation referendum.

Finally, in April 1863, President Lincoln approved the admission of West Virginia (with its abolitionist state Constitution) as the thirty-fifth American State. But even he expressed concern over the validity of such an act. Since Lincoln adamantly held the position that no state could legally secede from the Union, how could it be consistent for him to recognize a breakaway government of only part of Virginia? On top of that, didn’t the Constitution require the approval of the entire state in order for it to split up? And finally, since it was known that most of the new state actually supported the Confederacy, was all of this really a good idea? In the end, the Union troops’ control of the region was sufficient for Old Abe to give West Virginia the green light.

Ok, so South Ossetia has eons more history behind its conflict, including the USSR, which really bungled things. In addition, the region has been allowed a semi-autonomous rule (mostly peacefully), whereas western Virginia was most definitely under the authority of the Commonwealth. Furthermore, the current Georgian-Russian conflict is over South Ossetia to begin with, whereas the creation of West Virginia came was a result of another, already-being-fought conflict.

Of course, the West Virginia situation is a microcosm of the entire Confederate States of America, where many areas were split between unionism and secession. I guess it really helps your cause when there are multitudes of allegiant soldiers defending your land at the time when you want to break free. I bet Russia is thinking the same thing.