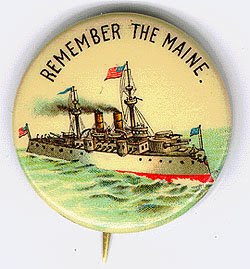 Could George W. Bush’s stance on the Russian invasion of Georgia actually have good merit? I argue yes; whether he knows it or not is up for debate. My conclusion is based on the “splendid little war” of 1898, the Spanish-American War.

By 1898, Cuba’s fight for independence against Spain was beginning to seriously affect the United States. First, there was a human rights issue where hundreds of thousands of people were dying in “reconcentration camps”, and second, there was rioting that caused concern over Americans and American interests in Havana. Though most of America did not want war with Spain originally, the USS Maine was sent to Havana in January to let everyone know that we were serious about protecting our interests; in February, it blew up unexpectedly, and though we still didn’t go to war, public opinion was finally pushing strong for it. In April, President William McKinley, who had quite the anti-war disposition, requested enough force only to help Cuba become independent and not to go after Spain in general. But Congress shortly thereafter issued demands (signed by McKinley) directly to the Spanish government, imploring them to get out of the island. Spain’s response: War on America. As a result, not only was Cuba’s independence secured, but the United States also received control over Puerto Rico, Guam, and the Philippines after only 109 days.

Currently, we have a situation where a recently independent country and ally of ours is being attacked and suppressed by its former ruler. In addition, there are surrounding countries that are of high interest to the United States because they are emerging democracies, also under threat of the same former ruler. The Georgian situation, though it is fighting to maintain its independence and not to first achieve it, is extremely similar to that of Cuba, Guam, Puerto Rico, and the Philippines in 1898 from the American perspective. We only want to help Georgia and do not wish to have war with Russia, but if it came to that point, then it would serve as a tool to strengthen other interests of ours that are currently under similar threats. We have even begun to follow the course as we did in 1898, essentially demanding that Russia leave Georgia while expecting that they will not.But unlike the Spanish war, it is not likely that Russia will declare war on us over such statements, so the question becomes one of where President Bush is looking to go from here. McKinley effectively goaded the Spanish into declaring war in order to both vindicate his anti-war stance and make the U.S. look like the defenders and not the attackers; perhaps Bush also wants to avoid having the US take the Bad Guy role once again. But there is one big difference between now and 1898: a serious state of war with Russia would be near cause for World War III instead of just a sequence of amphibious naval battles between two belligerents as was with Spain. Therefore, it is important that Bush be careful, even in taking steps to defend an ally, because who knows- Russia might just take the Spanish route and let all hell break loose, this time being much worse.

My Point: If we stay on this course of hard-line demands regarding an oppressive force that is smothering an ally of ours, then we are risking war with a nuclear power. This would hardly be “splendid”, nor would it be “little”. But, we have an ally in Georgia whom we have claimed we will defend, and we have interests to defend in democratizing countries in the surrounding region. Therefore, if we must go to war with Russia over this, then Bush’s current scheme is not without good historical backing: start with demands upon Russia to evacuate the area, and then authorize just enough American support to help the Georgians when Russia refuses to acquiesce; this will either bait the Russians into giving us an excuse for further self-helping action or it will force them to back down altogether. It worked in the Spanish-American War; it might just work here.

For a war that we didn’t originally want to have, America got some nice spoils in 1898. I don’t think that we can expect the same result in 2008, and in fact, I would be concerned about the safety of Alaskans. But if something must be done about Georgia, there is a successful precedent, and the President is, for now, following it.