The Audacity of Humility

A lot has been made about the messianic and arrogant images coming off of Barack Obama, not the least of which is John McCain’s new ad. While it’s true that we have had a few successful bullish, “get-out-of-my-way” Presidents (Andrew Jackson, Teddy Roosevelt, et. al.), there have also been a couple really successful (good or bad being irrelevant) humble Commanders-In-Chief. The name Lincoln comes to mind first, but perhaps a more extreme example is oft-overlooked Calvin Coolidge.

Ever wonder why it’s easy to forget that Coolidge was President? It’s because he really embodied the idea of being a public servant. Let’s make this easy and just go through the gamut of “Silent Cal”. 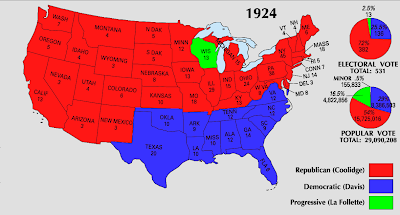 My Point: Looks like whether he was a great leader or not, Coolidge was successful and liked by the people. In the mid-1920s, America did not require a forceful, divisive, arrogant, or otherwise audacious personality in order to prosper economically or feel confident in their President. This is not to say that America should stick with people like Coolidge; no, no, rather it is merely to make known that the most extreme humility can be a formula for success and prosperity, even in the office of the leader of the free world.

I guess this means that you don’t have to be a celebrity in order to lead.