Sauerberg for Senate! Rail on Durbin! 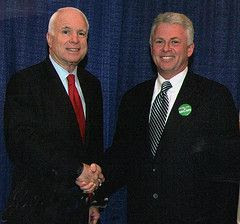 The latest in the Dick Durbin saga shows another huge gap between the liberal and conservative approaches to our energy situation. His suggestion? Put more money into building Amtrak cars.

OK, seriously, Durbin thinks that by expanding capacity of Amtrak, we can help people who find gas prices to be too high. However, this is not really a solution as much as it is a short-term use of your tax dollars. It’s one thing to support an idea of nationwide (or at least big-city) high-speed electric rail in order to help deal with fuel costs and transportation issues. But instead,

“The bill proposes a package of financing options to bring Amtrak’s existing 1,500 passenger cars up to snuff and ‘lay the groundwork for the next generation of trains built in America,’ [Durbin] said.”

Those next generation cars aren’t high-speed electric cars, no, no, no. Instead, they will only add to our dependence on oil because they will promote the current super-high-priced-diesel engines that we have now.

On to Sauerberg: He is pro-offshore-drilling, pro-tax-cuts and perhaps most importantly, he’s willing to fight in this race. (Link to a good Human Events article here.) Oh, and did I mention that even though he’s a doctor, Sauerberg is anti-abortion?

I don’t need to keep up with the reasons why Durbin needs to leave office. But he hasn’t had a real fight against him in a while. Steve Sauerberg is not Abe Lincoln, U.S. Grant, or Ronald Reagan, but he is just what the doctor ordered for Illinois and the nation. He will fight for offshore drilling, lower taxes, protection of our troops, gun rights, strict constructionist judges, no amnesty for illegals, and more.

Find out more about Sauerberg here and DONATE HERE.

Durbin is a big name and a powerful insider. But when he proposes putting our tax dollars into a system that will only encourage more fuel usage instead of protecting us by drilling offshore or finding alternative transportation, we must remember: