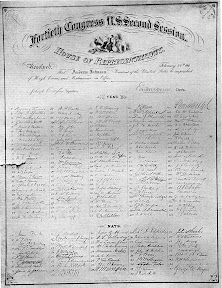 Good old Dennis Kucinich is back in the news with his Bush impeachment attempt, claiming that he goaded Congress into voting for war with Iraq by using false claims. Given that the Bush-bash strategy no longer works (h/t pennpatriot), Kucinich must just be desperate and not mindful of the fact that being honestly mistaken does not equal lying.

In looking at this in the historical sense, the first name that comes to mind is Bill Clinton. But really, there was a lot more partisanship involved with the Impeachment of Andrew Johnson in 1868. Back then, Johnson was feared by the Radical Republicans because he seemed too friendly to the South after the Civil War. The Radicals wanted it to be really tough for ex-Confederates to regain everything from civil rights to statehood, but Johnson, being the only Southern Senator to remain in Congress during the war, felt otherwise. He originally seemed very anti-Confederate, but after he became President, it became obvious that he was really racist, and the only reason he was “anti-Confederate” at all was because he hated the oligarchic Plantation class. This was not good for a man trying to walk in Lincoln’s immediate footsteps.

The Radicals decided to set up a law that they knew Johnson would violate. The Tenure of Office Act, which was later declared un-Constitutional in 1926, dictated that no Presidential appointee could be removed without the consent of the Senate to replace him. Abraham Lincoln’s Secretary of War, Edwin Stanton, was taking over the Executive Branch and not letting Johnson exercise his newfound Presidential authority, and the Radicals knew it; in fact, it is claimed that Stanton used the Secret Service to spy on Johnson. After trying to get Ulysses S. Grant to replace Stanton and failing, Johnson just flat-out removed Stanton without seeking the Senate’s consent. Why he did this is not 100% known, other than wanting Stanton out of his way once and for all, but Johnson was known as a man who would rather buck his opposition and stand on his own instead of being a careful politician (left the Republican Party, vetoed the Civil Rights Act). It should be noted that Johnson intended for the new Secretary, Lorenzo Thomas, to be temporary and not permanent. In the end, the House passed three articles of Impeachment but each one failed to obtain conviction in the Senate by only one vote.

The irony between 1868 and 2008 is just teeming! Johnson was impeached because Congress created a law that he didn’t have to break and Kucinich wants to impeach Bush because he requested a vote from Congress that they didn’t have to make. Of course, Bush has the better defense, seeing as how Johnson did break the law, regardless of why it was set up, and Bush merely asked for Congress to do something that in reality they didn’t have to do.

My Point: In both cases, we see how Congress can fight against the President using ridiculous tactics (setting up trip laws) and backward logic (blaming the President for a Congressional vote). We also see the genius of the Founders’ Constitution, forcing the two chambers of Congress to be checks and balances on each other in such critical situations as Impeachment. There’s a reason why no President has ever been convicted on Impeachment Articles, and it’s a good one.

Frankly, I think it’s ridiculous that any attention is given to Kucinich now that we are months away from the new elections. But it’s something to think about as November approaches- it’s not easy to get rid of the President, so choose wisely!

L.A. County D.A. George Gascón Proves That He Is on the Side of Criminals, Despises Victims
Jennifer Oliver O'Connell