In Illinois, Gov. Rod Blagojevich (D) wants to move the state’s Dept. of Transportation out of the capital city, Springfield, and into downstate Harrisburg. Using the usual twisted Democrat logic, he believes that more government will make people happier and give them better lives.

At first, it sounds good:

But in the same sentence, it would

“…put government operations in a far-flung part of the state, the administration argued.”

“Blagojevich is frequently criticized for not living here or paying much attention to this region, so some see this as another example of him snubbing Springfield. The governor wants to make more moves like this, saying other parts of Illinois should reap the benefits of having government closer to their backyards.

‘We expect that that’s just the beginning of a trend,’ Blagojevich said in announcing the move in Harrisburg in late June.”

I was going to write a more lengthy post on the pros and, especially, the cons of the IDOT move, but instead, let’s take a look at the electoral map for Illinois from 2004 and figure out if the “far-flung” parts of the state would like to “[have] government closer to their backyards: 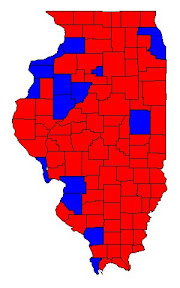 To be fair, Saline County, where Harrisburg is located, did vote for Blago in 2006. However, that has to be put into perspective- Springfield’s Sangamon County, which is ten times larger than Saline County, overwhelmingly told him to get lost, and though it also voted against him in 2002, this was a 13-point increase in anti-Blago votes from election to election, a big statement indeed.

Oh, and let’s not forget:

“Springfield lawmakers say there is plenty of space available here and are looking at whether a section of state law called the Seat of Government Act could restrict Blagojevich’s ability to move government jobs out of the capital city.”

This means that unless Springfield is under attack by people or by disease, the IDOT move would be illegal.