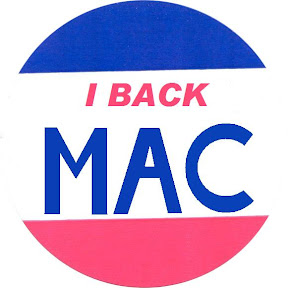 The last time that the general election’s final candidates did not feature either the incumbent President or Vice President was 1952, when Dwight Eisenhower (R-KS) took on Adlai Stevenson, Jr. (D-IL). The contest had many similarities to 2008:

There were several differences as well that should be noted: both candidates had recent executive/command experience whereas the 2008 candidates are legislators, and the Democrats had been in the White House for the last twenty years (causing the Republicans to be the ones desiring change).

But what really put Eisenhower over the top? Why, a great and simple campaign slogan, of course! Actually, it was more than just that; the Republicans created a combination of “I like Ike” with a quick and easy labeling of Stevenson- “Egghead”. From Wikipedia:

“Stevenson concentrated on giving a series of thoughtful speeches around the nation; he too drew large crowds. Although his style thrilled intellectuals and academics, some political experts wondered if he were speaking “over the heads” of most of his listeners, and they dubbed him an “egghead”, based on his baldness and intellectual demeanor.”

While it doesn’t seem that Barack Obama is bald at the moment, he is known for the way he gives prepared speeches, and the elite Left consider themselves the educated and intellectuals of our society… so… “Egghead Obama” might just be a working label. In addition, Obama must be speaking “over the head” of his listeners, because none of them can seem to articulate what they “hope” to see “change” other than the political party in the White House.

More similarities between Stevenson and Obama:

“Although Stevenson’s eloquent oratory and thoughtful, stylish demeanor thrilled many intellectuals and members of the nation’s academic community, the Republicans and some working-class Democrats ridiculed what they perceived as his indecisive, aristocratic air.”

My Point: In the end, Ike won, and his election was vindicated by his winning a second term in 1956. It’s tough to run a campaign when there is no incumbent to either support or demonize, but the election of 1952 can teach us a lesson: the old war hero who connected with the American public and who wanted to win the current war before pulling out defeated the orator who had nothing but rhetoric. In 2008, we have another old war hero who wants to win a current war before pulling out going up against a candidate who has nothing but good prepared speeches; he might need a catchy slogan to do it, but John McCain should be able to pounce on this and win.

That all said, if Obama really wanted to show he was smart, he would have used “Change In Which We Can Believe”, but grammar must not be his strong point.

That leaves John McCain to come up with a crafty rhyme. First I thought of “Yes We Cain!” because nothing good rhymes with McCain, or ‘Cain (“My Main McCain”?), but that could leave voters with reminders of his age. Instead, I suggest: “I Back Mac!” But I am not the first.