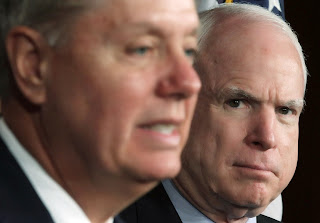 In a big development which has shaken the political world to its core, Senior Republican Senators John McCain and Lindsey Graham have announced their plans to get married, a move which culminates several years of intense courtship. The marriage is slated to take place on the dock of the San Francisco Bay on Easter Sunday.

“Always ones to glorify the Lord,” quipped an excited McCain, having just come from breakfast at the Senate cafeteria. “This has been a long time coming, my friends, and I couldn’t be happier. He’s my true soul mate.” Asked about his wife Cindy and how she was taking it, McCain took a moment to clear the air: “We both wanted to be in the White House, so we tied the knot. There isn’t a whole lot more to it than that. I know it sounds bad, but everybody’s doing it these days. Just ask my friends Bill and Hillary Clinton and Anthony and Huma Weiner!” Asked about the future of that relationship, McCain added that he had “politely asked for an open marriage.” “I hear she and Senator Cruz(R-TX) are an item these days,” quipped McCain before giddily leaving for a Senate meeting on nuclear arms warfare in the age of Putin.

When asked for a comment on the news, longtime McCain confidante and former US Senator Joe Lieberman(I-CT) issued the following statement: “Words cannot express my happiness for John and Lindsey, having both found love in their golden years. Having introduced them, I can tell you that it was love at first sight. From the intimate discussions about neo-Conservative foreign policy to the exhaustive discussions about fine wines and Napa Valley sunsets, there was a definite connection between the two. A certain chemistry, if you will. I saw how those two bonded over episodes of ‘The Care Bears.’ I was regaled with the stories of how John would carry Lindsey on his shoulders so that he could see the floats in the Macy’s Thanksgiving Day Parade. I heard those two sing ‘Do ya, do ya want my love?’ every Friday at the Congressional karaoke night. I saw how those two interacted when they were campaigning together in 2008 and when they were campaigning in 2012 for Governor Bionicle…erm, I mean Mitt Romney. Tee he he. Those two are just priceless. Again, I just cannot tell you how happy I am for them.”

Former Congressman Barney Frank(D-MA), himself a gay man, had a few congratulatory words as well: “I always knew their socially Conservative talk was all just a bunch of bluster. Those two have something I wish more people had: Openness, honesty, and love. I wish that more of our Republican friends would come out of the closet. It really is a liberating feeling, and who knows, maybe with a little more gay liberation there wouldn’t be so much congressional gridlock.”

Vice President Joe Biden offered his support: “There is nothing that I’ve ever seen in these stone halls that is more beautiful than what I see coming from those two. Going against the grain of cruel, cold-hearted society, you see a man willing to risk everything in raining love down upon another man. Neil Young can talk about screaming and bullwhips cracking all he wants, but he’s got nothing on those two!”

Senator Chuck Schumer(D-NY) dishes out the sordid details: “Let’s face it: The gentleman from South Carolina always was John’s boy lollipop. The things I have heard about those two! Their rooms are the absolute bane of the Congressional cleaning service. I once found myself in there around 1 AM one unfortunate Sunday morning. It looked like a dirty bomb had gone off in there! Numerous articles of clothing, candy wrappers, Wham! record sleeves, towels, and teddy bears strewn about all over the place. And people think we’re all just a bunch of boring, uptight squares!”

Catching up with Senator Graham, this reporter noted an uncharacteristically sprightly vibe about the Senior Senator from SC. Waving me over, we talked about a few things on the Senator’s mind on this important day. On the pen he carries in his hand: “This is something Johnny gave me. It’s the same pen Bob Dole gave him just before he died. It is something which I treasure immensely.” When asked about why he only just now decided to tie the knot with Senator McCain, he cited the recent decision by Jan Brewer, the Governor of McCain’s adopted home state of Arizona, to veto legislation which would have granted businesses the right to deny services to gay couples. “This just seemed like the right time,” said Graham. Regarding future Presidential aspirations, he stated “not until 2024, as Johnny and I are both ready for Hillary.” Asked if his sexual orientation would serve as a hindrance to his aspirations, Graham opined “What you must remember is that some of the big figures within the Republican Party have been, in one way or another, the gay man’s best friend. Just look at Ted Haggard, Joe Paterno, George HW Bush, Abraham Lincoln, and Larry Craig. These beloved Republicans have done more to advance the cause of gay liberty in America, so yes, I do believe that I can gain acceptance with the grassroots and the mainstream Conservatives and Republicans.”

In another development, Senator Patty Murray(D-WA) used the news to announce her engagement to Congressman Paul Ryan(R-WI).