Agents of Deception: Why Barney & Friends' Theme Music is Torture to the Intellectual Mind and Deceives the Masses 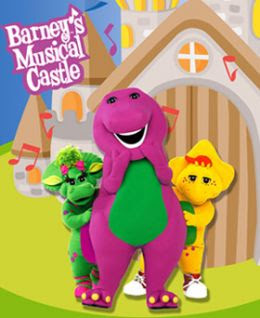 New torture techniques used against Guantanamo Bay detainees have been in the news lately. One such method of ‘torture’ is the playing of the “Barney & Friends” song which goes “I love you. You love me. We’re a happy family.” ad nauseum. From the jump, this appeared to be a mixed bag of marbles. On the one hand, those terrorists who’ve not grasped themselves a full and complete understanding of the English language(or those who are just too pea-brained to give a damn regardless of knowledge of the aforementioned language) would not be negatively affected by this new method of torture. On the other hand, you have those terrorists who would suddenly and simply spontaneously combust over the love overtones emanating from the song. It’s not just torture to terrorists, among other haters who are just gonna hate. It’s also torture to the intellectual mind, as it brings to the fore a whole new level of deception and outright lies. The fact that we trust our kids with Barney is concerning enough as it is, but the fact that we do so knowing that our children take to heart the far left, peace and love hokum espoused in songs such as “I love you. You love me…” is a cause for great alarm. All of this puts our society in the jaws of great peril, and I will explain why in the following paragraphs.

Aside from being too sunshiny and happy happy joy joy for my tastes, “We’re a happy family” is not only a factual fallacy, but also is a massive blunder that would cost any candidate an election. First of all, who is this “we” that is constantly referred to? “We” has such broad connotations that I don’t know where to begin. Back to the original topic, we as a nation and a planet are not one big “happy family.” If we were, there wouldn’t be all these endless wars, massacres, genocide, famine, corruption, and general strife around the world. And on a more local level, rates of divorce, single-parenting, out-of-wedlock births, gang rape, armed robbery, drug usage, fraud, and murder would be at or damn near zero if we were actually one big “happy family.” They are at all time highs, especially in the inner cities. And when do members of the big “happy family” fantasize about one another in a sexual manner? Never! We as a nation and a planet are not one big “happy family.” Rather, we are a nation ridden to the core with malcontentment and misanthropy. Society has lost God and has got to get itself back to the garden. To say otherwise is serial deception. And we’ve not even gotten into the political ramifications of such falsehoods.

Let us not kid ourselves, a falsehood to this degree brings with it political ramifications. Some are small, but most are broad and encompass many aspects of our lives. But back to the topic at hand. Statements like “I love you. You love me” are massively hyperbolic and misleading. When you boil it down to its essential components, such claims are really just hipster brouhaha on steroids, and it has our nation in such a stranglehold that we might not ever come back from the brink. Whether or not you love me is your choice, but that does not make it safe to assume that I love you. Such assumptions lead to many a broken heart when our hopes are dashed. Broken hearts then lead to hostility, hostility leads to war, and war leads to thousands of dead people. So, in conclusion, broad-sweeping assumptions can inadvertently lead to war and death. So can lying. Lying is like backstabbing, but I’ve already delivered a screed on that. Broad-sweeping statements such as “I love you. You love me.” can also fit into the category of lies, because, again, you don’t know if I really love you, do you?

In conclusion, I hope to have made my points in a clear and reasoned fashion. I must note that I have got nothing against Barney personally(some of my fondest childhood memories were of reading those Barney children’s books). What I do have misgivings with is deception, lies, and hippie propaganda disguised as children’s music/theme music. It’s indoctrination in the worst form.